London: A delegation of Sikhs representatives from a cross section of organisations and Gurdwaras across the UK met with a senior a Pakistani diplomat (on March 26, 2019) and have also written to Pakistan’s Prime Minister Imran Khan, pledging assistance in organising events linked to the forthcoming 550th Parkash Gurpurab of the founder of their faith. Amidst worrying regional tensions, the move will be seen as a welcome contrast to the events of recent weeks in South Asia.

Guru Nanak Ji was born in 1469 in the place now named after him, Nankana Sahib in Punjab, Pakistan. Sikhs around the world will mark the event in November this year in a big way, but Nankana Sahib will be the focus of this significant milestone in Sikh history. Thousands of Sikhs from across the globe will be attending the celebrations there and at other historic Sikh Gurudwaras and heritage sites in Pakistan. 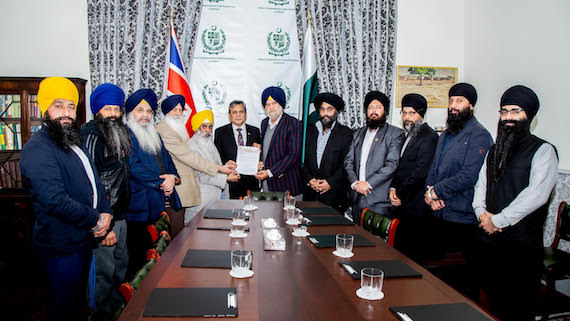 In a written release issued later the Sikh representatives said that the delegation was warmly received by Pakistan’s High Commissioner in the UK Mohammad Nafees Zakaria at the High Commission in London, to whom they handed the letter. They were assured by the seasoned diplomat that the Government of Pakistan would continue to engage positively with Sikhs in enthusiastically commemorating the Parkash Gurpurab in a special manner this year, just as it had already taken the lead in inaugurating the highly acclaimed Kartarpur Sahib corridor project.

The Sikh delegation offered expertise and a coordinated approach on a range of logistical matters, such as the provision of adequate accommodation for visiting devotees. For his part the High Commissioner sought feedback on issues such as the operation of the religious pilgrimage visa system which will be key to facilitating the entry of large numbers of Sikhs from abroad.

The letter to the Imran Khan expressed deep appreciation for his Kartarpur corridor initiative and requested further investment in the burgeoning Sikh-Pakistan relationship by way additional renovation work on Sikh Gurdwaras in Pakistan. Specifically mentioned was a request for enhanced facilities at Gurdwara Punja Sahib in Hasan Abdal.

The delegation briefed the High Commissioner of the Sikh nation’s desire to broaden and deepen its links with its vast heritage in Pakistan; it is a sentiment so powerful that it features in their daily prayers.

The meeting, which also covered other matters of mutual interest, was held in a cordial and friendly atmosphere and will be welcomed by advocates of peaceful coexistence South Asia.