India is having its general elections in coming weeks. Partisanship in India is no better than in the United States. Probably much worse. Political party choices polarize families, friends, and whole communities, and every election season can be a very divisive time.

No wonder then that the U.S.’s nearly 4.5 million Indian-Americans watch India’s elections with sharp eyes.

A recent episode on Indian-American Muslim comedian Hasan Minhaj’s show illustrated the nature of the diaspora’s interest in Indian politics. In a promo, he reveals his topic to Indian couples sitting at home. They are horrified: “Indian elections are a definite no-no.”

“Democracy is for people with power, people with muscle power and money power,” says one man. “It’s not for you and me.”

“There will be an accident,” says one woman. “You will be burnt to death. Be gone.”

“You cannot talk about Narendra Modi,” warns another woman.

Indeed, unless it’s something positive, then talking about Indian Prime Minister Modi can get people into real hot water. Last year in India, for instance, a high school teacher was arrested for writing on Facebook that voting for Modi is like “garlanding a dog.”

Talking about Modi in the U.S., meanwhile, is very controversial. The issue splits the Indian-American diaspora. One side believes in Modi and is devoted to advancing his vision for India. The other side believes Modi is a fascist leader with blood on his hands. 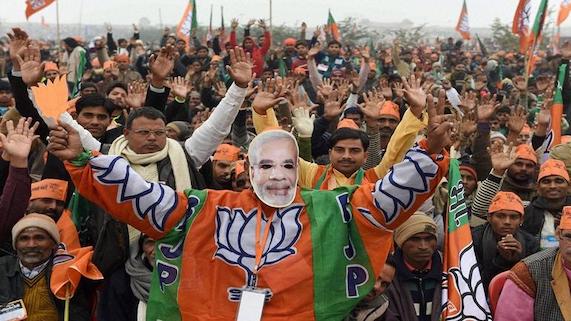 Nothing widens the divide more than the religious angle. Only about half of the Indian-American diaspora is Hindu. The other half are a diverse mix of Buddhist, Christian, Dalit, Muslim, Sikh, and so forth — or non-religious. Modi’s party is a religious nationalist party and he identifies as a “Hindutvavadi” (supporter of Hindutva). The ideology teaches that all Indians are Hindus and non-Hindus are foreign to India.

Beyond differences of opinion, the diaspora is also split in how it is involved in the Indian election.

Those who oppose Modi often follow elections in India with great interest, and maybe even talk or write about them, but do little beyond. Those who support Modi organize rallies, training camps, and campaign events — in America. While one side alleges that Modi staged a pogrom, thousands of volunteers from the other side return to India to physically canvass for his political party.

Perhaps another reason that talking about Indian elections is controversial is because the Indian diaspora’s surpassing interest in the issue often slips into direct involvement — even to the point of serving as boots on the ground in India.

The opposition party, the Indian National Congress (INC), is just as guilty as Modi’s party, the Bharatiya Janata Party (BJP), of attempting to organize direct involvement of Indian emigrants in Indian elections. Yet they cannot hold a candle to the success of the BJP in harnessing the diaspora. The Overseas Friends of BJP (OFBJP) provides the organizational structure underlying that success.

The OFBJP was launched in America in April 1992 to counter negative press.

Eight months later, in December, a BJP-organized crowd of 150,000 tore down a mosque in India. Their fervor was stoked by speeches from BJP elected officials and even the party president, who demanded that the government build a Hindu temple there instead. Razing the mosque provoked nationwide riots in which an estimated 2,000 Muslims were killed. In response, the opposition-controlled central government temporarily banned the Rashtriya Swayamsevak Sangh (RSS), a paramilitary involved in the violence.

The BJP, which was created by the RSS in 1980, responded to the scandal by establishing a strong international presence of trained party activists. Internationally, the OFBJP eventually expanded to nearly 40 chapters. In America, their membership is largely composed of U.S. citizens.

The OFBJP-US says its goal is to project a “positive and correct image of India” in the West and “correct any distortions” in media coverage. They work hand-in-glove with BJP leadership back in India. For years leading up to Modi’s 2014 election, OFBJP chief Vijay Jolly toured the U.S. to speak at diaspora rallies and meet American politicians.

“We need to touch base with as many among the diaspora as possible and to indoctrinate them with the BJP ideology,” Jolly says. Speaking in 2015, after the BJP won in India, he urged the OFBJP to be “expansionist.” He has since been replaced by Vijay Chauthaiwale as head of the BJP’s Foreign Affairs Cell.

Considering its 2014 levels, any expansion of the OFBJP-US would make its reach and potential for influence truly colossal.

Nationwide, it boasts 18 chapters in 13 states. In 2014, it reportedly had 4,000 members. It has an elected National Executive Committee of 10 people and a nearly 40-person National Council.

In 2013, over 1,000 people turned up to watch Modi deliver a live, televised address to the OFBJP-U.S.’s annual convention in Florida. When the BJP won India’s state elections in December 2013, the group organized victory parties around the country. In Houston, Texas, over 300 people showed up.

Then the OFBJP-US swung into high gear.

They had a three-pronged strategy. Organize phone-banks for Indian-Americans to call back to India and tell people to vote for the BJP. Finance a Modi victory fund. Travel back to India to put boots on the ground to campaign for the BJP directly. Like a sleeper cell waiting for orders, the group sprung into action in January 2014.

In Houston alone, a diaspora media outlet reports that 700 people “worked round the clock to motivate voters in India.” The key organizer was Ramesh Bhutada, who also happens to be Vice-President of the American chapter of India’s RSS paramilitary. Nationwide, then OFBJP-US President Chandrakant Patel said that thousands of activists were making 200 calls or more per day.

How much money OFBJP members actually donated to Modi’s victory fund is a difficult thing to determine. Yet the mass mobilization of U.S.-based BJP backers who went to India to canvass for Modi was widely reported.

By March 2014, Chandrakant Patel was personally leading a team of over 1,000 OFBJB-US operatives. Aside from promoting the party, some of them reportedly even ran polling booths. They remained in country for the duration of the phased, month-long voting process.

Their hard work paid off. Modi was announced as the new Prime Minister on May 12. Over the ensuing weeks, the OFBJP-US hosted victory parties throughout America. One event in Atlanta, Georgia drew a crowd of 700. Others also drew hundreds.

Because of his human rights record, Modi was barred from visiting the U.S. in 2005. As the newly-elected executive of India, however, he was now free to travel. He soon made plans to do so.

To herald Modi’s arrival, Foreign Affairs Cell head Vijay Jolly again began touring the U.S. In September 2014, just four months after he was elected, Prime Minister Modi spoke to a crowd of nearly 20,000 in New York City. It was a publicity bonanza which enthused BJP backers all around America. For instance, diaspora media reports that Vijay Pallod, who campaigned for Modi in India, flew from Texas just to attend.

After 2014, the OFBJP-US continued to organize rallies, stage protests, and host tours by BJP elected officials from India, expand its membership, and train its activists.

The new OFBJP-US President, Krishna Reddy Anugula, estimates the group has a loose network of up to 300,000 Indian-Americans. They began mobilizing months ago in preparation for when polls open in India on April 11, 2019. Coordinated phone-banking is underway, activists are making hundreds of phone calls each, and putting in hours a day after work to support the Indian political party from America.

Anugula says that thousands of Indian-American operatives will travel to India to work until the phased elections end.

While these teams permeate India, trained activists in the U.S. are making a stir.

In February, after a local youth bombed a military convoy in Kashmir, the BJP blamed Pakistan and began agitating for war. As tensions soared between the two nuclear-armed powers, the OFBJP organized protests in at least six U.S. states to demand that India attack Pakistan. Signs said things such as “world hates Pakistan.”

From America, they have also heeded the call of India’s Prime Minister.

Terming himself a “chowkidar” (watchman), Modi declared in March, “Your chowkidar is standing firm and serving the nation.” He called on everyone working for India to say “Main Bhi Chowkidar” (I am a watchman). Obediently answering Modi, activists attending Chai pe Charcha events began publicly pledging to work for his re-election.

Most recently, at the end of March, over 400 activists gathered in California’s Silicon Valley for a conference featuring Kailash Vijayvargiya, a BJP national general secretary.

Thus, the OFBJP’s operational approach seems to follow this model. Embrace the political party line. Emigrate. Take up U.S. citizenship, which requires renouncing Indian citizenship. Spread the mother country’s party line to project a “positive” image in the adopted homeland. Cultivate diaspora interest in the party. Return to India — as U.S. citizens — to campaign for that party and instruct Indian citizens who to vote for.

Thus, every election season, the BJP harnesses the help of people who are dedicated to keeping the BJP in power in India despite having abandoned life in India themselves.

Elections in India conclude on May 19. Until then, the OFBJP promises to grow only more heavily involved. The impact of thousands of American boots on the ground in India remains to be seen.

It appears, however, that Indian-Americans organized by the BJP have already played a huge role in influencing Indian elections and are working to expand that role.

Perhaps that influence — some might call it interference — is one reason why, as Hasan Minhaj discovered, the topic of India’s 2019 General Election is no laughing matter for the Indian-American diaspora.

* Pieter Friedrich is a South Asian Affairs Analyst who resides in California. He is the co-author of Captivating the Simple-Hearted: A Struggle for Human Dignity in the Indian Subcontinent. Discover more by him at pieterfriedrich.net.