Ludhiana: A report in The Indian Express (IE) notes that various Sikh organisations of Punjab have announced that they will “boycott” SAD-BJP this election. They said that SAD (Badal) was a party connected with the beadbi of Guru Granth Sahib while BJP is its ally.

On Thursday (April 11), a meeting was held under the banner of the Sikh Talmel Manch (STM) at Gurdwara Sarabha Nagar, Ludhiana. “Over 22 Sikh organisations took part in this meeting including Ek Noor Khalsa Fauj, Guru Nanak Dev Satkar Committee etc”, notes the report in IE.

Amritpal Singh, media coordinator of the STM, said, “We have decided to boycott SAD-BJP candidates in every constituency. Our 11-member committee will be going to every district to appeal to people to not vote for the party and its alliance partner who are responsible for sacrilege incidents in Punjab.” 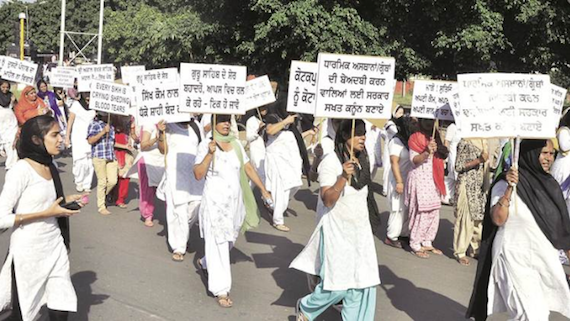 “The way SAD is celebrating the transfer of SIT member Kunwar Vijay Partap Singh indicates that how relieved it is as it was fearing some action from SIT in the coming days”, IE quotes SMT convenor Santokh Singh.

“This transfer was unjustified and hence no matter how many more members of SIT are there to investigate the Behbal Kalan firing case and sacrilege case, the ECI has questioned the credibility of an officer, we are protesting”, IE quotes him further.

Amritpal Singh said, “We have decided to support Bibi Paramjeet Kaur Khalra in Khadoor Sahib. In the remaining districts, we will be appealing to the Sikh Sangat to support the best candidate of their area barring SAD-BJP.”

Sukhjinder Singh, another member, said, “The Badals had paid for their deeds in the Vidhan Sabha, this time too they will pay. As BJP is party to them, they also need to be boycotted.”