The announcement was made during a rally of the party workers organised by its youth wing president Harsukhinder Singh alias Bubby Badal at his residence in phase 11 at Mohali. 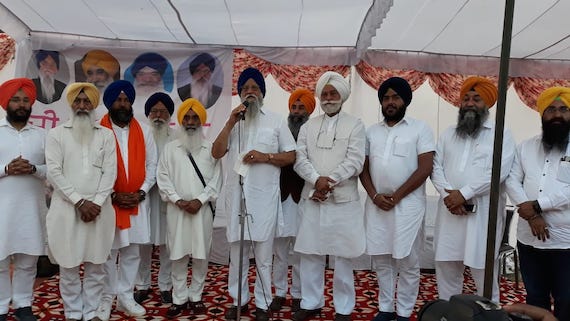 “We have decided to withdraw the nomination of our candidate from Kahdoor sahib constituency Gen. JJ Singh in favor of Bibi Paramjeet Kaur Khalra. People from Punjab and Punjabi Sikh diaspora settled in different other countries was constantly in touch with us seeking our support to Bibi Paramjeet Kaur Khalra. They would ask us to support her due to the great sacrifice of her husband Jaswant Singh Khalra who was killed  in police custody for raising the issue of cremation of thousands of dead bodies in Amritsar  as unclaimed by the police during militancy. There was an appeal to us through various medias including social media as well. So respecting their sentiments, We have decided to withdraw our candidate to support her,” announced Ranjit Singh Brahmpura, president SAD (Taksali) addressing his party workers amidst the chanting of slogans.

“But we also appeal to Paramjeet Kaur Khalra to contest the elections as an independent instead of as a single party candidate. We assure her a win from Khadoor Sahib as I had myself won the last parliament election from there with a margin of about 1 lakh votes while, daughter in law of former chief minister Prakash Singh Badal had hardly retained her seat with a very thin margin of about 18000 votes only,” Brahmpura said.

“There was a motif by some elements to field Bibi Paramjeet Kaur Khalra to collect funds from the off shore Sikh supporters. They wanted to usurp the donations expected from Punjabi diaspora abroad,” Brahmpura alleged claiming that Paramjeet Kaur Khalra had earlier refused his party to contest elections from the same seat saying that she did not want to enter politics.