Bhogpur/Jalandhar: Dal khalsa said the BJP’s choice of Hindutva terror face –Pragya Thakur, as their candidate for Bhopal parliamentary seat is a clear case of double standards of the Modi government on terrorism.

Speaking during a gathering in Bhogpur on Thursday (April 18) senior party leader Harcharanjit Singh Dhami said that, “Pragya Singh Thakur’s candidature was a reminder that the BJP was determined to make the country a Hindu India. The BJP is hell bent to play the Hindutva card to retain power, come what may.” 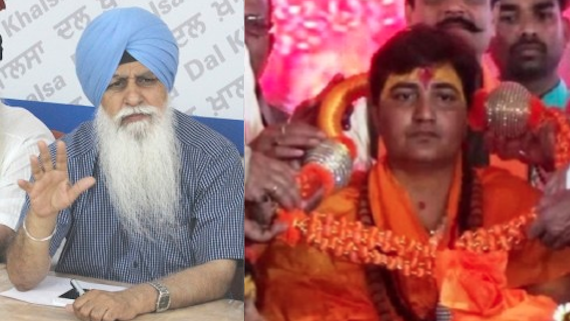 “For the BJP, anti-minority faces like her are assets which help it to consolidate majority votes. Polarizing or dividing the country on communal and caste lines has always been BJP’s agenda but now it has come to the fore even more brazenly under the tutelage of Modi and Shah,” he added.

Speaking of double standards, the Dal Khalsa leader dwelt on the irony that on the one hand the Indian state wants the whole world and the UNSC to declare Azhar Masood as a global terrorist for masterminding terror attacks on Indians and on the other the BJP is honouring Sadhvi Pragya Thakur- an accused in bomb blasts cases on innocent Muslims, with nomination to the Indian Parliament.

Giving her nomination is like the Congress party honouring the Pandey brothers with nomination to the Uttar Pradesh Assembly after they hijacked an aircraft in favour of the then Congress chief Indira Gandhi, in the late seventies.

He chided the SAD to learn from their alliance partner and not to run down the Sikhs who have actively participated in the Sikh struggle for rights and freedom. Throwing a jibe at them, he asked, “Can SAD (B) dare to field any Khalistani militant as their official nominee?”