Faridkot, Punjab: Faridkot CIA staff incharge Narinder Singh reportedly committed suicide on Sunday leaving behind a number of unanswered question related disappearance of a youth who was picked up by him and two other cops on May 18 night. Family members say that Narinder Singh had admitted to them that he had picked up the youth from a Gurdwara Sahib in Ratti Rori.

The district police that was avoiding the answers till yesterday evening, has came up with a version that during custody, the youth committed suicide by hanging himself. To cover up his death in custody, Narinder disposed of the body on Saturday.

As per information a youth named Jaspal Singh come to Sangrahur (Faridkot) from Panjava village (Mukatsar district) and was staying with his friends at a Gurdwara Sahib in Ratti Rori village. The police had picked him up from there at around 11 pm on May 18. Next day his family members met Narinder Singh at around 3 pm. 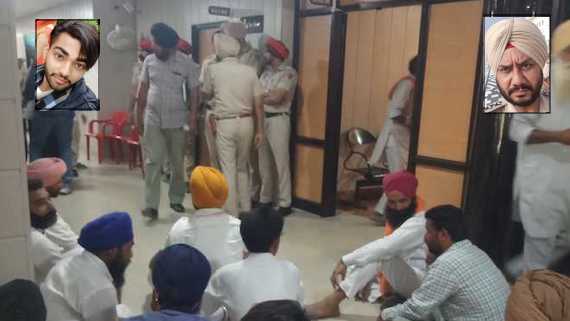 As per the family Narinder Singh told them that he had picked up the boy on the complaint of a person who had alleged that the youth was having affair with his daughter.

The family members said that the CIA incharge Narinder Singh told them that some person had taken the boy from police station but the cop failed to disclose the identity of that person. When the family asked him to show the CCTV video he said that CCTV cameras installed in the police station were not working. The cop committed suicide in his office on Sunday (May 19) evening.

It is being suspected that the youth was killed in custody and his dead body was disposed away by Narinder Singh. The police saying that the youth had committed suicide but fails to tell that where is his body.

As per latest reports the family members of Jaspal Singh have started a dharna outside the office of Faridkot SSP. Political leaders such as Sukhpal Singh Khaira, Bibi Paramjeet Kaur Khalra, Kultar Singh Sandhwan, Master Baldev Singh and activist Lakha Sidhana also reached outside the SSP office and extended their support to the victim family.

As per information the maternal grandfather (Nana) of Jaspal Singh attempted to lit himself in front of SSP office but the incident was prevented. The family is asking to the police to disclose whereabouts of their son and act against culprit police personnel who had picked up Jaspal Singh along with now deceased Narinder Singh.