Ludhiana: Samvad is organising a Panthic Diwan at Mulanpur Dakha on 35th Anniversary of “ਤੀਜਾ ਘੱਲੂਘਾਰਾ” (Teeja Ghallughara) on June 2. It may be recalled that Indian army’s attack on Darbar Sahib and other Sikh Gurdwaras in Punjab and adjoining states is regarded as third Ghallughara of the Sikh history. 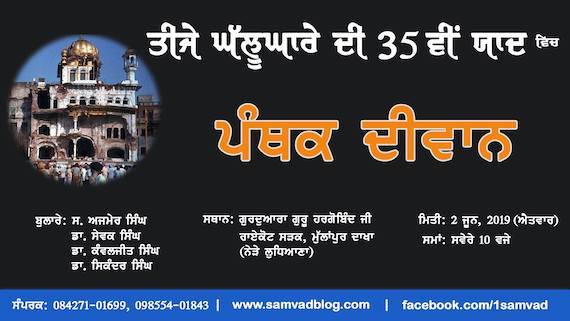 As per information released by Samvad, the Panthic Diwan will be held at Gurdwara Guru Hargoind Ji, Raikot Road, Mulanpur Dakha (Near Ludhiana). The Diwan will begin at 10 am in morning.

Samvad has appealed to the Sikh sangat to attend the samagam.