Pathankot/Chandigarh: It is learnt that 6 of the 7 accused in the rape-and-murder case of an eight-year-old nomadic Muslim girl in Jammu and Kashmir’s Kathua were convicted by a special court in Pathankot today. One accused, Vishal has been acquitted by the court.

According to the 15-page charge sheet, the eight-year-old girl, who was kidnapped on January 10, 2018, was raped in captivity in a temple in Kathua district after having been kept sedated for four days before she was bludgeoned to death. 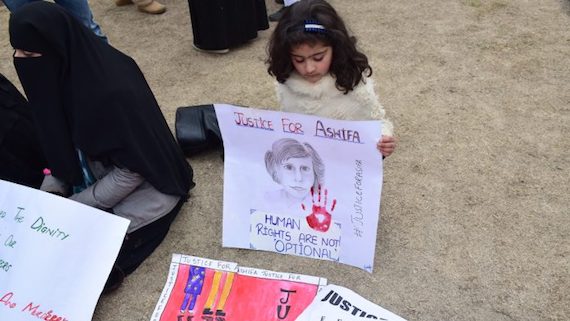 State Crime Branch had arrested eight people including a former revenue official and his son, four policemen including a sub-inspector, a police head constable and two SPOs among eight accused. One of the accused is a juvenile.

District and session judge Pathankot Tejwinder Singh awarded life sentence to Sanjhi Ram, Deepak Khajuria and Parvesh Kumar after holding them guilty under Sections 302 (murder), 376D (gang rape) and 120B (criminal conspiracy) of Ranbir Penal Code (RPC). The three have also been sentenced to 25 years in jail over charges of gang rape and fined Rs 1 lakh each.

The other three accused, Anand Dutta, Tilak Raj and Surender Verma, who were held guilty under section 201 (destruction of evidence) of RPC, have been sentenced to five-year imprisonment.

The seventh accused, Vishal Jangotra, was acquitted of all charges.

It is notable that Hindutva groups had staged protests against the arrests of the accused individuals, who are all Hindus. Two ministers of the ruling Bharatiya Janata Party, Forest Minister Lal Singh Chaudhary and Industries Minister Chander Prakash, attended one of the protests.