LAKEWOOD, Washington: In United States of America (USA) Airman 1st Class (A1C) Harpreetinder Singh Bajwa an Airman with the U.S. Air Force has received a religious accommodation allowing him to wear a Dastar/Turban, keep beard, and unshorn hair, in compliance with his Sikh religious beliefs. Harpreetinder Singh Bajwa, crew chief at the McChord Air Force Base near Lakewood, Washington, is the first active Airman to be authorized to adhere to Sikh religious grooming and dress principles while serving his country.

“I’m overjoyed that the Air Force has granted my religious accommodation,” said A1C Harpreetinder Singh Bajwa. “Today, I feel that my country has embraced my Sikh heritage, and I will be forever grateful for this opportunity.” 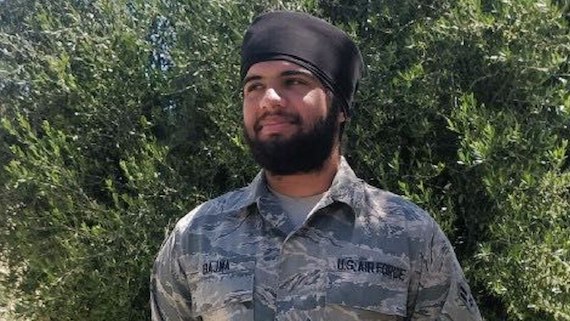 As a first-generation American born to an immigrant family, A1C Harpreetinder Singh Bajwa enlisted in the US Air Force in 2017, eager to give back by serving his country. At the time, he was not permitted to practice certain Sikh beliefs due to Air Force grooming and dress rules. However, after learning about religious accommodations granted recently to Sikh servicemembers in the U.S. Army, as well as a religious accommodation allowing a Muslim Air Force JAG Corps officer, Cpt. Maysaa Ouza, to wear hijab, A1C Bajwa contacted SAVA to determine whether he, too, would be eligible for an accommodation.

SAVA, through its pro bono counsel BakerHostetler, then connected Bajwa with the ACLU, which had successfully represented Cpt. Ouza and had won a groundbreaking lawsuit against the Army, requiring religious accommodation of a Sikh ROTC cadet. In response to a letter sent by the ACLU on Bajwa’s behalf, the Air Force approved his accommodation request.

Heather L. Weaver, senior staff attorney for the ACLU, applauded the Air Force’s decision: “No one should have to choose between following their faith or serving their country. We’re pleased that the Air Force granted our client’s request, and we hope that all branches of the military come to recognize the importance of religious inclusion and diversity.”

Lieutenant Colonel Kamal Kalsi Singh, president of SAVA, added: “As one of the first Sikh service members to receive a religious accommodation from the Army, I’m proud to see A1C Bajwa become the first active Airman allowed to wear his Sikh articles of faith while in uniform. Sikhs have a long history of serving in militaries around the world, and I’m confident that A1C Bajwa will represent that tradition honorably.