During the meeting, Tan Dhesi MP highlighted the demand for direct flights for this route, as well as the tourism, cultural and trade benefits London-Amritsar flights could bring. In May 2019, CAPA India announced that the most searched for route between India and Europe with no direct service is Amritsar-London. 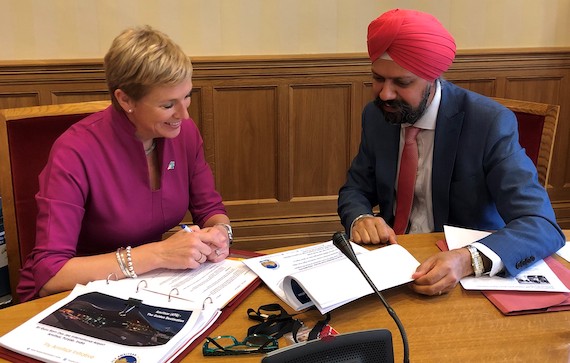 This is the latest meeting with Parliamentarians, after the launch of the London-Amritsar flights campaign in Britain in 2018. The initiative has gained cross party support and global press coverage since calls for this route began.

With over 100,000 people visiting Sri Harmandir Sahib from across the world every day, London is the ideal global hub for those visiting or living in the UK travelling onto Amritsar, with approximately a million Punjabi diaspora living in the UK.

Passenger numbers at Amritsar have also been rising dramatically; recently it was found to be the fastest growing airport in India in 2018, showing the demand to travel to this popular destination is increasing.

Dhesi continues to campaign and discuss this issue in Parliament, engaging with airports and international airlines internationally to ensure this much needed route opens.

“Direct flights between London and Amritsar are vital in connecting the world to this cultural, tourist and spiritual destination. When meeting the Aviation Minister, I highlighted the consistent demand from the Punjabi diaspora and others regarding a direct flight along this route, as well as the immense trade and tourism benefits this could bring to the UK. I will continue to raise this issue in Parliament, so direct London to Amritsar flights become a great success”, Tanmanjeet Singh Dhesi, MP for Slough said.

“I’d also like to thank the Fly Amritsar Initiative for their assistance in this important project and for providing the presentation shown to the Minister”, he added.

“It was good to meet Tan Dhesi MP and discuss the campaign for direct flights between London and Amritsar. I look forward to exploring further the trade and tourism potential this route could bring to the UK and also to the Punjabi diaspora worldwide”, minister Baroness Vere said.