Mumbai: As per media reports at least one lakh Muslims on Monday (July 2) congregated in Malegaon in response to a call for a law against mob lynching.

Calling it the first rally by the community to protest mob lynching, the organisers said the killing of Tabrez Ansari, 24, from Jharkhand, was the final trigger, Indian Express reported. 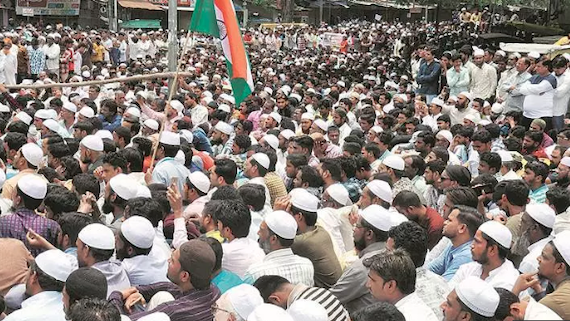 Representatives of Jamiat Ulema, the umbrella NGO which called for the silent protest, urged governments to take note that on a “weak call” the entire textile town had “come out to safeguard the Constitution”. They said, “We do not seek revenge, and don’t believe in violence. We believe in the rule of law.”

In a letter submitted to the Maharashtra administration, the Muslim community has urged the President to write to all state governments and Union Territories about lynchings and remind the state heads of their constitutional duties. There is also a demand for Rs 50 lakh compensation to the family of each victim of mob lynching.