London: A meeting was held in London between office bearers of the Gatka Federation UK and Guru Nanak Satsang Sikh Gurdwara to discuss preparations for this year’s UK Gatka Championship. The Gatka championship has been held on an annual basis, with about a dozen Akharas (teams) participating, in a different town/city each year, commencing in 2013 with Gravesend, then Derby (2014), Southall, Smethwick (Birmingham), Ilford (London) and Slough (2018). This year it will be held at Guru Nanak Satsang Sikh Temple (Cannock Road, Wolverhampton) on Saturday 21 September, between 10am and 6pm. 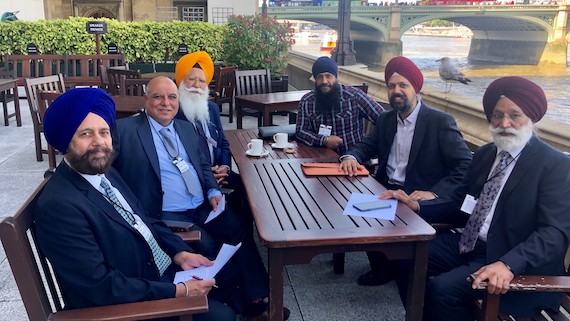 MP Tanmanjeet Singh Dhesi with others

Tanmanjeet Singh Dhesi MP (Slough), who has been serving as the founder President of Gatka Federation UK for the last seven years, remarked “I’m delighted that for the first time Wolverhampton will be the host city. This is very much a family occasion and provides girls and boys, along with men and women, the platform to show their prowess of this centuries old Sikh martial art. In addition to the Cannock Road Gurdwara Committee, I would like to thank the Gatka Federation UK Secretary Herman Singh Johal and the entire Committee, who put in so much hard work to make this a reality. Any UK based team that would like to participate should contact us.”

Balraj Singh Atwal (President of Guru Nanak Satsang Gurdwara) said, “It’s an honour for our Gurdwara to host the UK Gatka Championship and we have been looking forward to it since we requested last year to take this seva (service). It will be a free family event, open to all, with langar (community kitchen food) and refreshments served throughout the day, in addition to other activities. Anyone who would like to volunteer, or for local businesses who wish to be a sponsor, please contact us. I would urge everyone to attend and show their support for Gatka.”