Chandigarh: The issue of lynchings of Muslims and Dalits in Indian subcontinent by Hindutva elements was raised in United Nations Human Rights Council (UNHRC). Paul Newmman Kumar Stanisclavas, representing Center of Africa Development and Progress (an NGO) of South Africa raised this issue during the 17th Meeting, of the 41st Regular Session, that was held before UN’s Human Rights Council on July 1, 2019.

Paul Newmman Kumar Stanisclavas mentioned that India was the signatory to ICCPR and ICSCR and stated that in the last five years there has been a rise in the number of hate crimes being committed against Muslims and Dalits of India. In last couple of months, Indian Muslims have witnessed raise of hate crimes against their community 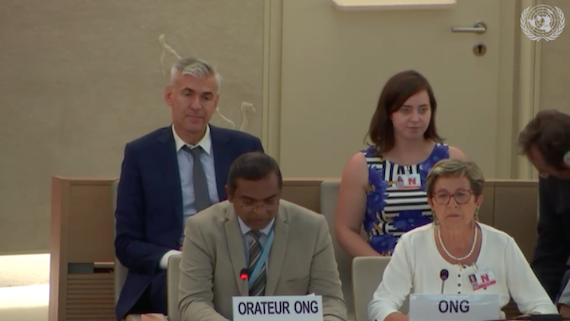 He pointed out that since April 2017 at least 10 Muslim men have been lynched publically in India.

“The attacks have contributed to a growing sense of insecurity among Muslims and has intensified religious tension. The recent trend is to make Muslims chant Jai Sri Ram. Ten days ago 24-year-old Tabrez Ansari was beaten for hours until he died in the hands of the Hindu mob in the eastern state of Jharkhand for not chanting Jai Sri Ram. Recently a Muslim teacher was attacked o a train for being Muslim. He was heckled to say Jai Sri Ram, when he refused he was beaten and forced to get off the train”, he added.

Paul Newmman Kumar Stanisclavas summed his speech by requesting the UN to remind India to follow its Constitution. He stated, “These fanatic Hindu mobs have been allowed to move around with apparent impunity. The Indian state has remained mute to the cries of the minorities. We urge the UN to intervene and request India to follow the principles laid in its own Constitution.”

Full speech of Paul Newmman Kumar Stanisclavas may be watched on http://webtv.un.org/ from 2:09:30 onwards. He was speaker number 73.