Chandigarh: The representatives of Indian and Pakistani governments, and representatives of Sikhs who were included in Pakistan’s delegation held a meeting on Kartarpur Sahib corridor issue at Wagha today. This meeting was held at Wagah in West Punjab (Pakistan) under second round of talks between India and Pakistan.

Interestingly, the Ministry of Home Affairs of Government of India issued three written press releases after the Wagah meet.

In first release issued at 2:43 PM (Amritsar Time) the MHA of India shared details and its version about second round of talks with Pakistan.

In second release issued at 2:45 PM (AT) the ministry claimed that ‘the construction work on the Rs 500 crore Passenger Terminal Complex at Dera Baba Nanak, Punjab for Kartarpur Sahib Corridor is going in full swing’.

Kartarpur Sahib Corridor – State of construction work on East Punjab side | An image released by Ministry of Home Affairs, Government of India on 14 July 2019

It is notable that Pakistan has reportedly completed more than 90% construction work related to Kartarpur Sahib corridor, which will connect Dera Baba Nanak in East Punjab with Kartarpur Sahib in West Punjab to allow Sikhs to visit Gurdwara Darbar Sahib, Kartarpur Sahib.

Since the laying of foundation stone for construction of Kartarpur Sahib corridor in November last year, Pakistan had taken a lead in construction work and kept the issue in discussion by regularly releasing updates and photographs of the work in progress.

The MHA, in is press release issued today, said: India urged Pakistan to take into consideration the sentiments of the pilgrims to have smooth, easy, unrestricted access throughout the year to be able to visit the Holy Gurudwara Kartarpur Sahib. In this context, the following requests were reiterated:

It further states that “[p]rogress was made in finalising the draft Agreement with regard to the modalities. It was agreed to allow visa free travel for the Indian passport holders and OCI card holders seven days a week. Throughout the year, 5000 pilgrims will be allowed to visit Kartarpur Sahib Gurudwara per day. The pilgrims will be allowed to travel as individuals or in groups and also on foot. Pakistan highlighted the infrastructural constraints on their side and conveyed that they may be able to accommodate many of the Indian proposals in a phased manner”. 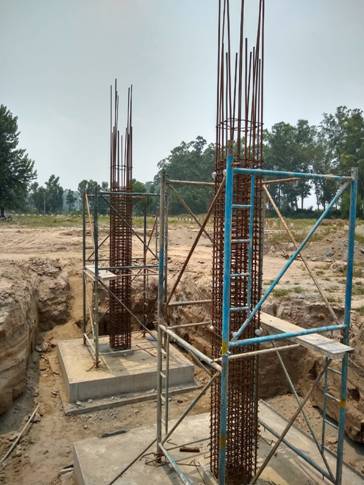 Kartarpur Sahib Corridor – State of construction work on East Punjab side | Another image released by Ministry of Home Affairs, Government of India on 14 July 2019

“Both sides have agreed to maintain a channel of communication and work towards finalisation of the Agreement on Kartarpur Sahib Corridor. The technical teams would meet again to ensure a seamless connectivity for the Kartarpur corridor is operational in time so that the pilgrimage can begin in November 2019”, reads written statement by India’s MHA.

Two Sides Will Resolve Remaining Issues in Next Meeting: Pakistan

Briefing the media at Wagah after about four hours long second round of talks on Sunday, Pakistan’s Foreign Office spokesperson Mohammad Faisal, who was leading the 13-member Pakistani delegation, said there has been positive progress in the corridor talks.

There are positive developments… Both countries have agreed 80 per cent and beyond regarding the Kartarpur corridor agreement,” he said, adding that the two sides would resolve the remaining 20 per cent issues in the next meeting. When asked about the joint statement, Faisal said: “Until we agree on the final draft, we cannot share. On unresolved issues, we think we will have to have another sitting.”

Replying to a question about how many Indian Sikhs will be issued permit at the opening of the corridor in November, he said: “It may be 5,000 or 8,000…I cannot give the exact number. This has to be decided yet.”

Before the start of the meeting, Faisal said Pakistan is committed to opening the corridor for Sikh yatris on the 550th Parkash Gurpurab of Guru Nanak Ji. “Pakistan Prime Minister Imran Khan wants peace in the region. He is committed to open the corridor in time for the 550th Parkash Gurpurab celebrations of Guru Nanak Ji in November 2019,” he said.


Note: PDF copies of above press releases were printed from the website of Public Information Bureau of Government of India on July 14, 2019.