New Delhi/Chandigarh: Indian media is dominated by upper castes and media organisations have failed to diversify their newsroom and news coverage, reveals a new report released by Oxfam India and Newslaundry. 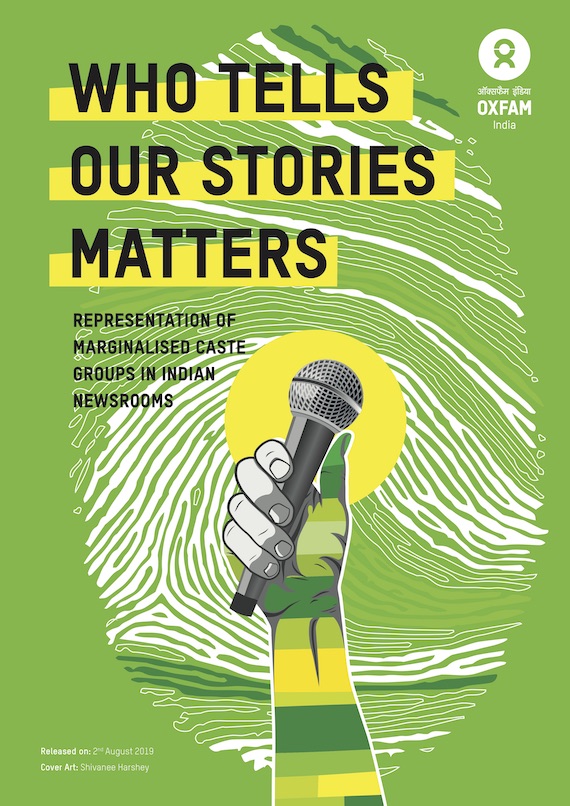 Title page of new report by Oxfam and Newslaundry

“The report starkly reaffirms that marginalised groups are absent in news media, particularly in leadership positions which determine who gets the space. Even stories written on those affected by discrimination are by those who are privileged and upper caste. Honest collective efforts have not been made to include more voices and create equal representation in newsrooms. It is disheartening to see that media, which is one of most recognised institution of democracy, fails Dalits, Adivasis and other marginalised groups.”

“This report is important for those working in and working with the media as it presents an opportunity before them to deliberate a way forward that upholds the constitutional guarantees of equality and fraternity,” said Amitabh Behar, Chief Executive Officer, Oxfam India.

The report uses multiple methods — surveys, byline count and triangulation with publicly available government sources to identify castes of journalists, anchors, writers, editors and panellists. Six English and seven Hindi newspapers, flagship debate shows on 14 television channels, 11 digital news outlets, and 12 magazines were examined to collect caste details for the period of October 2018 to Match 2019. Over 65,000 articles and news debates were analysed across the publications to provide a quantitative picture of which groups get to speak on various subjects and to what extent.

‘Who Tells Our Stories Matters: Representation of marginalised caste groups in Indian Newsrooms’ was launched as journalists from across the country gathered at the Media Rumble in New Delhi. Some of the key findings of the report are:

Media’s problem with representations is affecting the quality of news coverage in the country. The report shows the dangerous trend of only one English newspaper accounting for over half the share of coverage on caste issues.

“The most overused cliché “make the invisible, visible” perhaps explains the situation of our media institution today. There are discussions and commentary on how representative we are but in absence of any real data to understand the severity of the problem, the conversation around this is not as productive as it can be. “

“This report is important and after seeing the results we are totally convinced of its need. There is no democracy without diversity. For democracy to thrive, journalism must thrive and for journalism to thrive, diversity must be robust. We have to do this consciously because the numbers on caste diversity in newsrooms are dismal. This is a dreadful commentary on the quality of our democracy. This report is a first step in holding a mirror to ourselves and once we have a dashboard with the numbers on it, we can try and improve them every year. We will aim to do this report annually and hopefully see the numbers improve. We hope other industries do so too, across newsrooms and board rooms,” said Abhinandan Sekri, CEO Newslaundry.

The report suggests urgent need to take proactive steps, including affirmative action, to diversify newsrooms in line with the country’s social and demographic character. To this end, systems to encourage inclusion must be put in place, and concerted efforts made to train and hire journalists from across the social spectrum.