Jeddah, Saudi Arabia: A statement released by Organisation of Islamic Countries (OIC) on August 6 noted that ‘following a request from the Islamic Republic of Pakistan, an urgent meeting of the OIC Contact Group on Jammu & Kashmir at the level of Permanent Representatives was held in Jeddah on 6 August 2019 to review the recent developments in the Indian occupied Jammu and Kashmir (IoK)’. 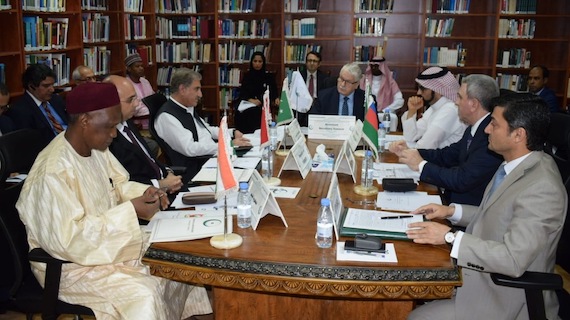 The meeting was chaired by OIC Assistant Secretary General Amb. Samir Bakr Diab and attended by the Minister of Foreign Affairs of the Islamic Republic of Pakistan H. E. Mr. Makhdoom Shah Mahmood Qureshi, and the Permanent Representatives of Azerbaijan, Niger, Saudi Arabia and Turkey.

⊕ ALSO READ – India Tried to Crush Will of Kashmiri People, We Support Kashmir’s Right to Self Determination: Bhai Daljit Singh

In a statement delivered on behalf of the Secretary General, the OIC expressed its deep concern over the critical situation in IoK and condemned the gross human rights violations in Jammu and Kashmir and encouraged the parties for a negotiated settlement on the basis of relevant UN Security Council resolutions, OIC Summit decisions and CFM resolutions.

As per the statement Foreign Minister of Pakistan provided a detailed account of the ongoing deteriorating situation in Jammu and Kashmir and urged the International Community to take urgent necessary actions to protect the people of Jammu and Kashmir.

Other members of the Contact Group also delivered statements expressing their support to the Kashmiri people and their right to self-determination.

Earlier on August 4 the IOC had issued a statement about the situation that was then developing in Jammu and Kashmir region. The statement reads as follows:

OIC Expresses Concern about the Deteriorating Situation in Jammu and Kashmir

The General Secretariat of the Organization of Islamic Cooperation (OIC) is deeply concerned about the deteriorating situation in the Indian occupied Jammu and Kashmir including reports of deployment of additional paramilitary forces and use of banned cluster munition by the Indian forces to target civilians.
The General Secretariat is saddened to learn about the civilian casualties resulting from ceasefire violations carried out by Indian forces across the Line of Control and expresses solidarity with the people of Indian occupied Jammu and Kashmir.

The OIC reiterates its call upon the international community to rise up to its responsibility for the peaceful resolution of Jammu and Kashmir dispute through the democratic method of a free and impartial plebiscite in accordance with relevant UN Security Council resolutions and aspirations of the people of Jammu and Kashmir.