Tarn Taran: Extending their solidarity with Kashmiri people and their cause, the Dal Khalsa and Shiromani Akali Dal Amritsar (Mann) today fired a salvo against Shiromani Akali Dal (Badal) for supporting Indian Govt’s move to strip J&K of its special status.

“Badals have shot on their own foot by conveniently joining the RSS/BJP bandwagon to trample and snatch the rights of another minority. How can they dare to ask for autonomy to Punjab in future, which has been the core agenda of SAD since 1970’s and on whose plank they launched the morcha”, said Kanwar Pal Singh, spokesman of Dal Khalsa in a press conference here today. 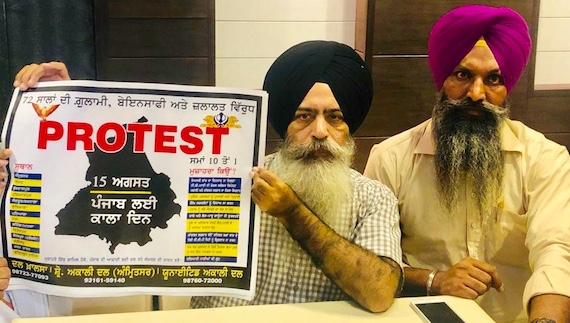 He also questioned studied silence of likes of Sukhpal Singh Khaira who is known votary of devolution of power. He said Sukhbir Badal and Sukhpal Khaira should not be in any illusion. [Indian state] is not going to devolve power as sought by Akali Dal since 80’s. The direction, in which the current Indian state under Narendra Modi is transforming, is towards more centralisation and more Hinduization.

Kanwar Pal Singh along with representatives of SAD (Amritsar) was in city to meet people and make arrangement for the demonstration in the city on Aug 15. He was accompanied by UAD leader Gurdeep Singh Bhatinda and Harpal Singh of SAD Amritsar.

Pertinently, Dal Khalsa, SAD (Amritsar), United Akali Dal and Sikh Youth of Punjab has joined hands to stage protests on Independence Day against the atrocities, political subjugation and denial of rights to Sikhs in the last seven decades. Their activists will hold a two hour demonstration at 15 district headquarters.

Referring to Narendar Modi’s address to the countrymen in which he said article 370 and 35-A paved way to secessionism in Kashmir, Kanwar Pal Singh reminded that Modi’s one-time mentor and BJP stalwart L K Advani has dubbed the Anandpur Sahib resolution as secessionist document in his book “My country, My life”. Its RSS anti-minority mentality that’s reflected from Advani’s and Modi’s views about minority aspirations, he said without mincing words.

He said due to increased hostilities between Indo-Pakistan in the wake of Indian government abrogating article 370, the Kartarpur corridor is likely to become causality. Notwithstanding Pakistan’s public commitment for going ahead with corridor project, he said the region is sitting on an edge where even a spark can ignite the already surcharged atmosphere.

They slammed BJP leaders including Haryana chief minister for using derogatory words Against Kashmiri women. They warned Hindutva brigade to hold their tongue. They said Badal appointed Jathedar Gaini Harpreet Singh has rightly and timely issued warning to such sick mind elements and urged Sikhs to come forward and protect the dignity of Kashmiri women at all cost.