A press release states that UK MP appraised Indian ministers about the long-pending demand from the large diaspora and those within the Punjab for direct flights between Amritsar and London. He emphasized that the best way to initiate direct flights would be for the Air India to demonstrate leadership by initiating this route, before other international airlines too realise that it would be hugely beneficial for them and travellers. 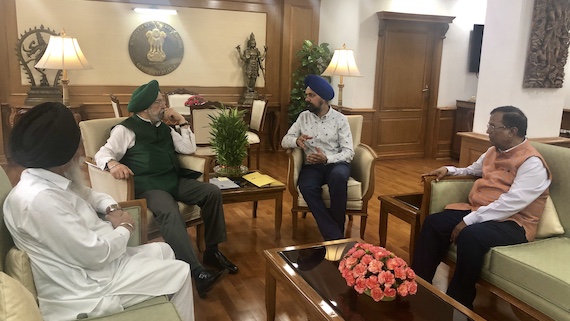 UK MP Tanmanjeet Singh Dhesi with Indian Ministers and another

During the meeting minister Som Parkash said “I certainly favour more direct flights, as that will boost commerce, trade and tourism within the Punjab and neighbouring states. We listened intently to the details of the demand and my colleague Mr Puri assured MP Dhesi that the union government will try to ensure it happens at the earliest possible opportunity.”

On the occasion Civil Aviation Minister Puri informed that he would look into the matter with his officials to see what could be done. He certainly wanted the “Guru Ki Nagri” (the Guru’s town) Amritsar to progress and become a stronger gateway for North India and beyond.

MP Dhesi, whose own Slough constituency (close to Heathrow airport) has a lot of Punjabis residing, thanked both ministers for their time and added, “Since being elected, I have been taking this legitimate demand of the diaspora community to Indian ministers, because people, especially the elderly and those with young children, do not want the huge inconvenience of time delays, stopovers and changing aircrafts. In addition to boosting trade, tourism and cultural ties between both nations, it will no doubt prove lucrative for operators, since Amritsar is visited by millions of worshippers/tourists each year and it is high time there was a direct link between the global centre of London and the spiritual centre of Amritsar,” said Dhesi.