Utterances by Pro-Hindi Imperialism Speakers on ‘Hindi Day’ Backfires in Punjab; Spark Protests Across the State

Chandigarh: The issue of languages in the Indian subcontinent is a sensitive and important political question. As the Hindutva nationalist are trying to impose their agenda of linguistic homogeneity and hegemonic imposition of Hindi in the Indian subcontinent, the language issue is expected to take prominence and spark unrest amongst various linguistic and cultural groups.

The imposition of Hindi has been a multi-layered phenomena in post-1947 Indian subcontinent but with the Hindutva regime in power for second consecutive term now, the Hindi imperialism is adopting more sharp and destructive tools to impose Hindi and marginalise other languages of the sub-continent.

In Punjab the Languages Department (Bhasha Vibhag), formerly Punjabi Department (Mehkma Punjabi), observed ‘Hindi Day’ on September 13. An event was held at the department’s headquarter in Patiala. Speaking on the event a pro-Hindi imperialism speaker Dr. Hukum Chand Rajpal went on to abuse the Punjabi language. Another speaker Dr. Tejwant Mann condemned Dr. Hukum Chand Rajpal’s when the former was given time to express his views. But soon the Dr. Tajwant Mann started expressing his views in favour of Punjab, the state-backed organisers turned off the speaking and obstructed in speech.

As per media reports, Dr. Hukum Chand Rajpal was heard saying that ‘with in two years, you will come to know what is the Hindi’.

The incident has sparked strong protest from the Punjabi society. Various writers, authors, activists and religious leaders have condemned the incident. The SGPC appointed jathedar of Akal Takht Sahib Giani Harpreet Singh has also issued a statement demanding apology from Dr. Hukum Chand Rajpal and others who were responsible for September 13 incident.

Pro-Punjabi and anti-Hindi imperialism demonstrations were held at various places in Punjab today.

Patiala: A number of students, research fellows, retired professors and activists gathered in front of Bhai Kahan Singh Nabha library at Punjabi University in Patiala and registered their protest against imposition of Hindi.

At Punjabi University Patiala retired linguist and language activist Prof. Joga Singh addressed the gathering and criticised Hindutva forces on language question. He said that the imposition of Hindi was anti-thesis of idea of India that was promised before the 1947 partition.

Sardulgarh: A number of Punjabi writers, teachers, activist, students and youngsters gathered near bus stand in Sardulgarh town of Mansa district to lodge their protest against

Watch Video of Demonstration at Sardulgarh:

Bathinda: Another demonstration against imposition of Hindi was held in Bathinda. 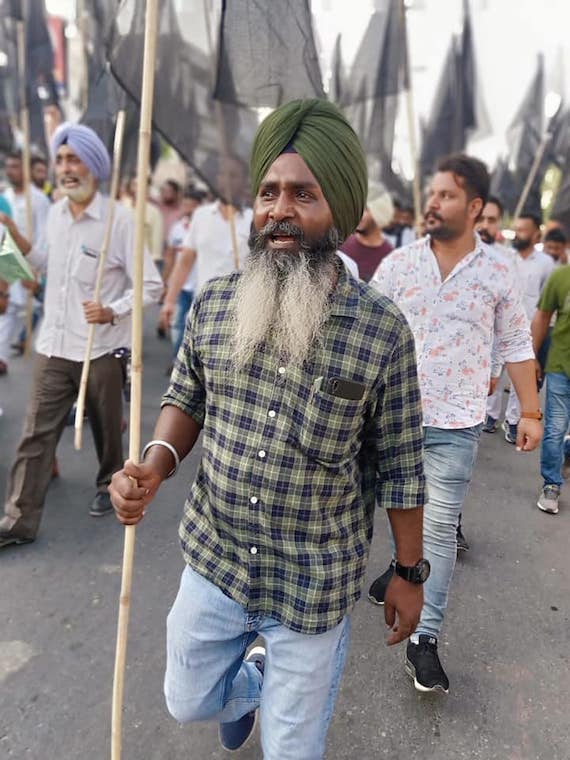 A view of protest against Hindi imperialism in Bathinda, Punjab 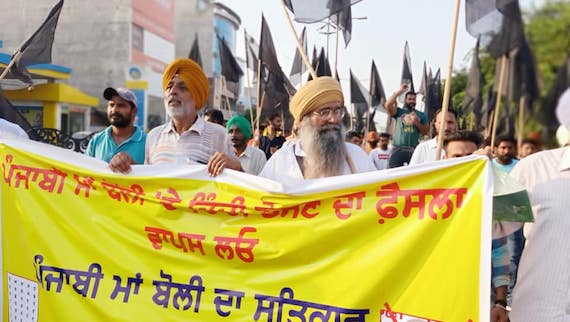 Another view of protest demonstration in Bathinda Another view demonstration in Bathinda

Watch Video of Demonstration in Bathinda:

Ludhiana: Another demonstration at Bharat Nagar Chowk in Ludhiana, where a number of writers and activists gathered to protest against Hindutva plans to impose Hindi in non-Hindi regions of the Indian sub-continent.

A Video of Demonstration in Ludhiana: A view of demonstration held at Bharat Nagar Chowk in Ludhiana Another view of demonstration in Ludhiana A view of demonstration at Students Centre, Panjab University Chandigarh

A written statement issued by the organisers of the protest demonstration at Panjab University Chandigarh reads as follows in verbatim:

Student organisation Sath and AFSS demonstrated a protest at Student Centre against Hindi writers who dishonoured Punjabi language and threatened to vanish it in coming years. A function was organized by Bhasha Vibhag Punjab in order to celebrate Hindi Diwas. In this program, some Hindi writers passed disrespectful comments against the Punjabi language by calling it cheap and vulgar. Hukam Chand Rajpal was chairing the function. When Punjabi writer Tejwant Singh Maan, President Kendri Punjabi Lekhak Sabha, was telling the audience about the importance and richness of Punjabi language and literature including great creation of Sri Guru Granth Sahib in the same, he was asked to speak in Hindi, on resisting the anti-Punjabi attitude of organizers he was forced to leave the stage.

Punjabi community took notice and gave a call for protest against this linguistic chauvinism by Hindi writers. Today students at various educational institutions of Punjab demonstrated protests at different places in Punjab.

Sath’s Mukh sewadar Juzar Singh said Punjabis will not accolade such attempts of the forced imposition of Hindi. He said the forceful imposition of Hindi has caused a big harm to languages like Marwadi, Haryanvi, Bagdi, Maithili, Bhojpuri etc and Punjabis have fought a tough battle for the survival of Punjabi. He said we denied the supremacy of any language and condemn the attitude of state and such writers.

AFSS president Kiran Preet Kaur said it is on agenda of RSS to deny the independent existence of all languages as dialects of Hindi, but Punjabi in itself is very rich and independent language having grand writings like Sri Guru Granth Sahib, Dasam Granth and many more religious scripture.

PSU spokesperson Amanpreet Kaur said Punjabis are warriors and they will not bend in front of dictators like Amit Shah who is willing to impose Hindi on in Hindi areas. After that Paramvir Singh recited a poem about glory of Punjabi language.

Sandeep from SFS said fascist state wants to make this part of Indian subcontinent a mono-lingual geographical area so that capitalists powers can smoothly loot the downtrodden.

Gangveer Rathore from Maa Boli Manch said Punjabis will not tolerate any kind of dictatorship on the issue of language.

Sath member Sukhwinder Singh concluded the protest by saying that Punjab’s soil is very fertile to give birth to warriors. We have a golden history of struggle and we are ready to accept any challenge given to us by the fascist government.