Rift in SAD (B)-BJP: SAD (B) fumed over its MLA joining BJP in Haryana, to contest assembly polls alone 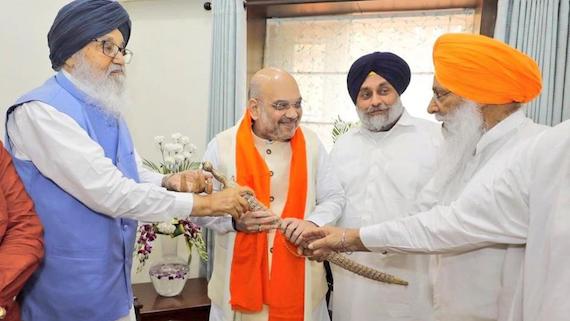 AMRITSAR: Rift emerged between the Shiromani Akali Dal (Badal) and Bhartya Janata Party (BJP) on Thursday (September 26, 2019) finally with former’s MLA Balkaur Singh’s  joining in latter in Haryana ahead of its assembly elections. Enraged over this, the SAD (B) broke ties with the saffron party in this state.

During the core committee meeting of the SAD (B) held at Sri Guru Ram Das Institute of Medical Sciences here, its leaders condemned the BJP for “using political muscle power to make its Kalanwali legislator Balkaur Singh join the saffron party” and said “this act was against the principle of coalition dharma”.
In a statement issued here after the meeting, the core committee said, “The BJP had not only betrayed the SAD (B) but also backtracked from the commitments it had made vis a vis the Haryana assembly elections”.
Viewing the decision to co opt Akali Dal Badal MLA Balkaur Singh into the BJP as an “undesirable” act not expected from an old ally, it said “the SAD (B) has always stood through thick and thin with the BJP in national interest. It is condemnable that the BJP has chosen to ignore the steadfast support of the SAD and decided to induct an Akali MLA into its fold”.

The core committee also noted that it was the BJP which had committed to contest the Haryana elections jointly with the SAD (B). It said Haryana chief minister Manohar Lal Khattar had even held a press conference on the eve of the parliamentary elections and announced that the BJP and the SAD (B) would contest the assembly elections jointly while soliciting support for BJP candidates in the Lok Sabha elections.
The committee said that the Akali Dal extended support to the BJP wholeheartedly across the country. It said however when the time came for the BJP to reciprocate the SAD’s gesture it backed out and even went to the extent of making an Akali mla join the saffron party.
The core committee said, “The SAD had always stood for peace and communal harmony besides safeguarding the rights of minority communities. We will continue to do so and will be the voice of all communities in the Haryana assembly”.
The core committee said the party rank and file to gear up to contest the Haryana assembly elections on its own. It said the party would soon come out with its list of candidates and assign duties to leaders and workers to run an energetic and result oriented campaign in Haryana.
The core committee also announced that the SAD (B) would always stand for its core principles of peace and communal harmony and do its utmost to ensure this was not disturbed in any manner. “The party has a history of fighting against all wrongs in society and follows the principle of ‘sarbat da bhala’ and will continue to do so”, it added.
The meeting, which was presided over by SAD (B) president Sukhbir Singh Badal, was attended by SGPC president Gobind Singh Longowal, Balwinder Singh Bhunder, Bibi Jagir Kaur, Maheshinder Singh Grewal, Upinderjit Kaur, Daljit Singh Cheema, Gulzar Singh Ranike, Nirmal Singh Kahlon, Bikram Singh Majithia, Sikander Singh Maluka, Surjit Singh Rakhra, Baldev Singh Mann, Hari Singh Zira, Manjinder Singh Sirsa and Darbara Singh Guru.