In Memory of Deputy Dhaliwal

by The Sikh Coalition

Our heartbroken thoughts and prayers remain with the family and community of slain Harris County Sheriff’s Deputy Sandeep Singh Dhaliwal. In an effort to honor the legacy of a man who broke down barriers for Sikhs choosing to serve, the Sikh Coalition joined 98 current and former Sikh military and law enforcement officials today in releasing letters urging reforms to police and military religious accommodation practices.

Deputy Dhaliwal, who was killed during a traffic stop in northwest Houston, Texas this past Friday, joined the Harris County Sheriff’s Office in 2009. In 2015, he secured a historic, first of its kind accommodation to wear his Sikh articles of faith while serving. As he rose through the ranks, Deputy Dhaliwal was beloved by his colleagues and the Houston community–and he was widely regarded as a role model for Sikhs and other religious minorities wishing to serve their communities in law enforcement. 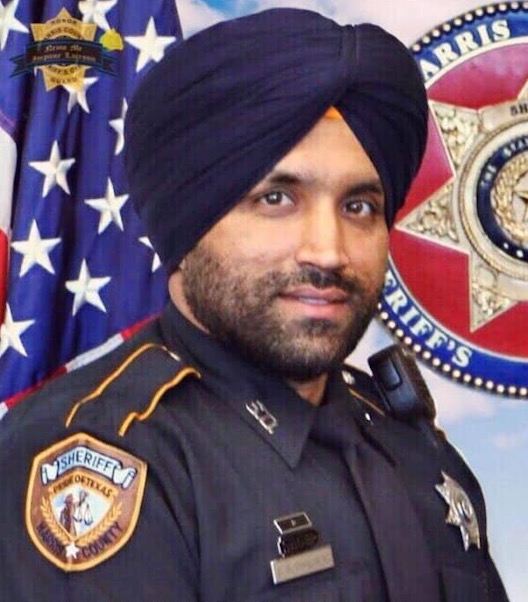 “Deputy Dhaliwal exemplified the Sikh ideal of seva, or selfless service to his community,” explained Manpreet Singh, Sikh Coalition board member, Houston community leader, and family spokesperson. “Though his passing is deeply painful, it serves as an important reminder that the Sikh faith poses no barriers to serving our communities proudly.”

Out of respect for the deputy and his legacy, 98 current and former Sikh military and law enforcement officials have signed two advocacy letters. The first letter urges state and local law enforcement to adopt clear accommodation policies for aspirant officers following in Deputy Dhaliwal’s footsteps. The second letter calls on the U.S. Department of Defense to implement a streamlined accommodation process across all branches of the U.S. military, similar to the policy change implemented by the U.S. Army in 2017, allowing for the pre-accession religious accommodation of observant Sikh service members. Each letter is accompanied by model provisions that reflect accommodations consistent with allowing observant Sikhs to practice their faith while working and serving their communities and country.

“These letters call on law enforcement agencies nationwide and the U.S. Department of Defense to honor Deputy Dhaliwal by making an easier, more equitable path to reasonable religious accommodations for those who would follow in his footsteps,” explained Sikh Coalition Senior Manager of Policy and Advocacy Sim J Singh. “It’s past time to improve outdated policies and remove bureaucratic red tape so that the next generation of heroes are as diverse as the communities they choose to serve and protect.”

So far, two arrests have been made in relation to Deputy Dhaliwal’s murder. We remain in close contact with community members and family spokespersons in Houston, and will provide further updates when appropriate.

As always, the Sikh Coalition urges you to practice your faith fearlessly.