New Delhi: People’s Union for Democratic Rights(PUDR) [on September 30, 2019] released its report on deaths of workers in Delhi while cleaning sewers/septic tanks over the last two years, titled “Chronic ‘Accidents’: Deaths of Sewer/Septic Tank Workers, Delhi, 2017-2019.” The release marks the occasion of the declared ‘target’ year for the Swacch Bharat Abhiyan (campaign) on 2 October 2019, coinciding with the 150th birth anniversary of Mahatma Gandhi and completion of five years of the Abhiyan. The truth is that far from reaching the target of a ‘clean’ India as a ‘tribute to Mahatma Gandhi,’ the day will remain under the grim shadow of the news of the two dalit children allegedly beaten to death by dominant caste men for defecating in the open in an ‘Open Defecation Free’ village in Shivpuri, Madhya Pradesh. 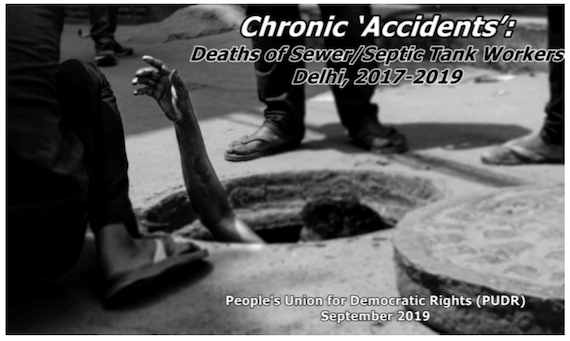 The PUDR report draws attention to another set of facts that need to be addressed before the target of ‘clean’ India is reached – these are the repetitive and chronic ‘accidental’ deaths of sanitation workers deployed to perform the crucial function of maintaining sewers and septic tanks, an essential aspect of ‘cleaning’ India.

The report details the findings of investigations conducted by PUDR into 6 incidents of deaths of sanitation workers in Delhi, while cleaning sewers/septic tanks between 2017 and 2019 (pages 4-10, Chronic ‘Accidents’).On the basis of these and other reported incidents the report draws attention to how the lack of provision in urban planning for maintenance of sewerage and septage systems, the lack of provision of safety gear and safety equipment or training for sewer/septic tank cleaners, and the lack of criminal prosecution of those guilty of sending them to do this hazardous work manually and without protection are significant patterns that mark all sewer deaths in the capital. The grant of compensation to victims’ families and survivors is one aspect of the Supreme Court order of 2014 that is occurring with more regularity in the capital city, but there is a tendency to ignore the crucial aspect of establishing criminal accountability (pages 10-12).

The report further discusses the legal interventions – especially the Prohibition of Employment as Manual Scavengers and their Rehabilitation Act of 2013 and the Supreme Court order of 2014 in the case of Safai Karamchari Andolan and Others vs Union of India and Others which established manual sewer and septic tank cleaning as part of ‘manual scavenging’ and prohibited them. These imposed stringent penalties on employers who sent workers to do this work manually and without protection (pages 12-14). The report also showed how non implementation of these laws is routine. By looking particularly at the urban plan of Delhi it examines the lack of provision for maintenance of sewerage systems and complete absence of attention to the conditions of work of sanitation workers who were drawn upon to do this work (pages 16-17).

In the final section the report critically examines the solutions sought to be adopted by the state agencies and societal groups to deal with the issue, and questions policies like ‘Swachh Bharat Abhiyan’ (pages17-18).It poses the questions why sewer/septic tank deaths occur repeatedly, and why the stringent laws against this manual, hazardous work are routinely violated, and can these deaths be really regarded as unpredictable ‘accidents’(pages 20-23). In probing the answers and their link with the systemic and embedded attitudes of caste and caste structures towards sanitation and sanitation workers, it reiterates the utter urgency of centrally factoring in the repeated deaths of sewer/septic tank workers into the design of sanitation and urban development policies and campaigns of ‘cleaning’ the country, and of demonstrating political and social will to stop these.