Protests on Gandhi’s Birth Anniversary in USA: “Gandhi Is Used as a Diplomatic Weapon”, say Protesters

USA (by OFMI): Groups on both the West and East coasts of the U.S. demonstrated against Mohandas Gandhi on October 2, his 150th birthday, describing the occasions as “150 years of racism.”

At the Martin Luther King, Jr. Center in Atlanta, Georgia, a group including several African-Americans demanded removal of the Gandhi statue placed at the center.

Jerry Jones, an activist associated with Organization for Minorities of India, displayed placards declaring: “No place for Gandhi in USA.” Another placard held by Jones quoted South African author Ashwin Desai, who stated, “Gandhi believed in the Aryan brotherhood. This involved whites and Indians higher up than Africans on the civilized scale.” In a 2015 interview with BBC, Desai further said, “You cannot have Gandhi as an accomplice of colonial subjugation in South Africa and then also defend his liberation credentials in South Africa.”

Demonstrators later shifted to Georgia State University to protest a commemoration of Gandhi hosted by Atlanta’s Indian Consulate in collaboration with the Gandhi Foundation of USA. 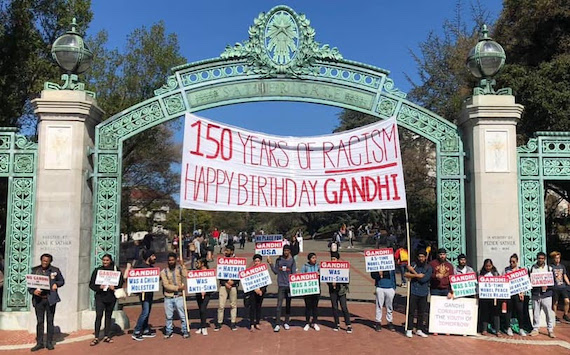 A view of protest on Gandhi’s Birth Anniversary | Source: OFMI

Previously, on Sept. 24, Jerry Jones and Nanak Singh represented OFMI at the Gwinnet County Board of Commissioners’ public hearing, where they appeared to register dissent against a proposed bust of Gandhi which the county intends to unveil at Bryson Park, Lilburn, GA on Oct. 12.

“There is no way there should be statues erected commemorating a man who could not stand Africans,” said Cheryle Renee Moses about the proposed Bryson Park bust. Moses, who is the Democratic nominee for Georgia State Senate District 9 in Gwinnett County, continued, “I’m sure many other African-Americans and black folks would feel the same way once they are educated on Gandhi’s real beliefs about Africans, about black folks.”

Also on October 2, at the University of California, Berkeley, approximately 20 people blocked the university’s Sather Gate. Holding a large banner declaring, “150 Years of Racism: Happy Birthday, Gandhi,” they chanted slogans such as “down with Gandhi” and delivered short speeches about why they were protesting Gandhi.

“Gandhi is used as a diplomatic weapon by the Indian State,” stated Bhajan Singh, a former director of OFMI. He claimed that the Government of India has expanded its budget to finance Gandhi statues around the world, adding, “They have occupied Kashmir, they have attacked the Sikhs in Punjab, they have attacked Dalits, Christians, and they want to forcefully convert and submerge the traditional Dravidian culture of India into the pro-Aryan culture.” In an interview with the university’s CalTV, Singh concluded, “He started his career by being the founder of apartheid in colonial South Africa.”

Demonstrators displayed placards calling Gandhi “father of apartheid.” Other placards claimed Gandhi had “hatred of women” and stated: “Gandhi was a sex offender.”

Although Gandhi is widely perceived as a “Mahatma” (Great Soul) and portrayed as an icon of peace, the past several years have brought increased calls for reevaluation of his legacy. In 2014, protests erupted over a proposed statue of Gandhi in London after historian Kusoom Vadgama began a petition alleging that the Indian activist “dishonored women.” In 2018, a Gandhi statue was removed from the University of Ghana campus after students and faculty began a petition against Gandhi’s “racist identity.” An ongoing campaign against a proposed statue of Gandhi in Malawi has generated almost 4,300 signatures on a petition calling him an “ardent racist.”

“Modi’s years of building upon the false Gandhi propaganda to support the goals of India’s Hindu nationalist movement are being challenged around the world,” comments OFMI’s Arvin Valmuci.