Disclosing this at Chandigarh on Wednesday president Khalsa FC Harjeet Singh Grewal said this inter-district event has been dedicated to 550th Prakash Gurpurb of Sri Guru Nanak Sahib in which Sabat-Soorat players from the age of 14 years to 21 years will participate. “The supreme motive of GSSF is to promote and popularize Sikh games and other popular games among the Sikhs and preserve the highest Sikh tenets in sports”, he added.

He informed that the Khalsa FC, affiliated with Punjab Football Association, would hold selection trials in each district to select district level football teams from October 29 to November 2. “After holding knock-out matches during inter-district tournaments from November 23 to November 30, state level final event will be organized at SAS Nagar stadium on December 7”, Grewal told. 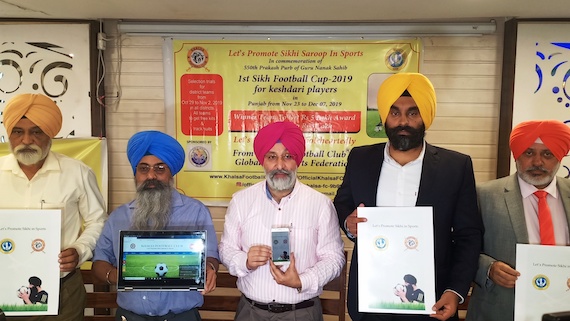 Elaborating the objectives of this club football promoter Harjit Singh Grewal added that this event would promote Punjabi culture and Sikh identity worldwide. He maintained that the event help to stop racial attacks on Sikhs. In addition to this, it would help to wean away the youth from drug abuse as well as channelize their energy into sports activities and the participants could enhance their carrier as sportsperson, he added.

Highlighting the paybacks to the players by Khalsa FC, he informed that all Keshadari teams in the districts would be provided with official kits, jerseys, socks and track suits besides travelling allowances. “Winning team will be awarded with Rs. 5 lakh and runner-up to get Rs. 3 lakh cash award. Besides, coaches of both the teams will also be awarded with cash prizes to the tune of Rs. 51,000 and Rs. 31,000 respectively”, Grewal said. 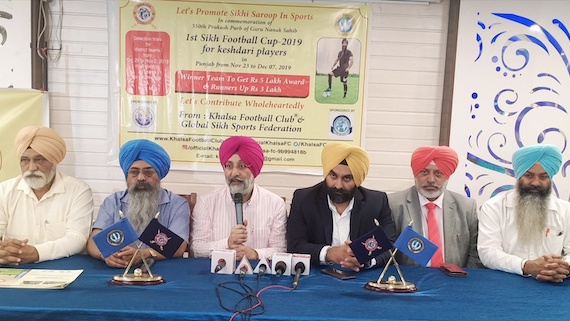 H S Grewal further added that Sikh martial art ‘Gatka’ demonstrations would also be held during all matches in the districts. Emphasising that Sikh Football Cup would be held every year in association with Punjab Sports department he avowed that Khalsa FC would act as launching pad for promising players so that they could realize their good luck in executing contracts with high valued football clubs.