Derby, England: A ‘session’ of the World Sikh Parliament (WSP) was held at Derby recently. 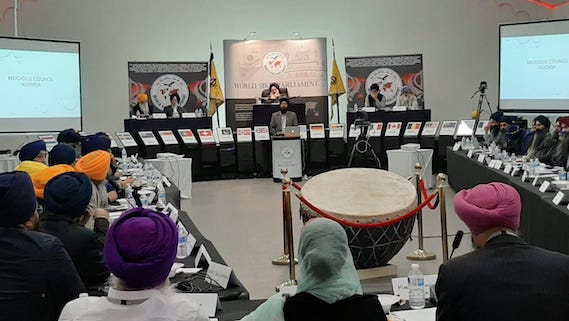 A press release issued Hardyal Singh and Manpreet Singh, both general secretaries of the WSP is being reproduced below, in verbatim, for the information of readers of the Sikh Siyasat News (SSN):-

Having taken its inspiration from the principles and practice of the Sarbat Khalsa (the traditional Sikh national gathering), the World Sikh Parliament’s latest annual gathering made an impressive sight. Over 125 delegates and observers from across the globe came together over a two-day session in Derby, UK and agreed a positive agenda to deal with a wide spectrum of key issues facing the Sikhs as they mark the 550th birth anniversary of Sri Guru Nanak Dev Ji.  The session was dedicated to the founder of the faith in this milestone year, as well as to the martyrs of the nation who have made the ultimate sacrifice in the ongoing struggle for national self-determination.

Recognizing its responsibility to lead and represent the Sikhs at a global level, based on the mandate of the Sarbat Khalsa held in the Sikh homeland in November 2015, and acting on the directions of the Jathedar of Sri Akal Takht Sahib, Bhai Jagtar Singh Hawara, the World Sikh Parliament has not shirked from dealing with the serious issues facing the Sikhs today. Having established separate Councils to deal with matters ranging from religious affairs, politics, human rights, education, internal affairs, as well as cultural and linguistic matters the Parliament is has organized itself to address the core needs of the nation, in a manner that aspires to live up to the ideals of the Khalsa Panth and the teachings of Sri Guru Granth Sahib Ji.

Proceedings were commenced in accordance with Sikh custom, with collective prayers and the blessing of a Hukamnama of the Sri Guru Granth Sahib. Members of the Parliament, comprising a wide cross section of elders, professionals, academics, students and other seasoned campaigners for Sikh rights, were also relayed a special message from Jathedar Bhai Jagtar Singh Hawara, in which he urged them to pursue the rights of Sikh nation in a selfless, principled but determined manner.

Key office bearers of the Parliament were announced, including that of the Speaker, General Secretaries, Regional and National Coordinators, as well as those responsible for driving forward the work of the individual Councils – all of which report ultimately to the general body of Parliament.

An appeal was made to other Sikh organizations and individuals to join the platform as members or advisors to the parliament which presently holds 130 members from 25 countries and 50 different organizations.

The delegates from around the world, as well as many other notable Sikhs who attended as observers, spoke of the excellent setting of the appropriately-named Banda Singh Bahadur Hall at Sri Guru Singh Sabha in Derby. The entire event was conducted in an optimistic and enthusiastic atmosphere which lead to some 18 hours of constructive closed doors debate on Saturday with the outcomes broadcast during a televised session on Sunday. The event also afforded an excellent networking opportunity for all the delegates who left the venue with a sense of purpose, founded on a collective mission to fulfil the wishes of an entire nation.

A wide variety of key Resolutions were adopted by the plenary session of the Parliament, reflecting the array of issues deliberated on.  Copies of all of those resolutions can be obtained from the General Secretaries. They included action points to: