Fremont, CA: October 17, 2019 — People from all walks of life packed the Los Cerritos Community Centre in Fremont, CA on October 12 for the launch of the Tamil translation of Captivating the Simple-Hearted: A Struggle for Human Dignity in the Indian Subcontinent.

Released in honor of Periyar EV Ramasamy’s 140th birth anniversary, the event drew over 130 people. The keynote address was delivered by Dr. K. Veeramani, president of Dravidar Kazhagam, the social movement founded by Periyar in 1944. Dr. Veeramani praised Captivating as a book useful for devotion, adding, “We are happy that a Tamil translation is made available. We would be honored, and I request the permission and I already obtained it, for the release in Tamil Nadu also.” 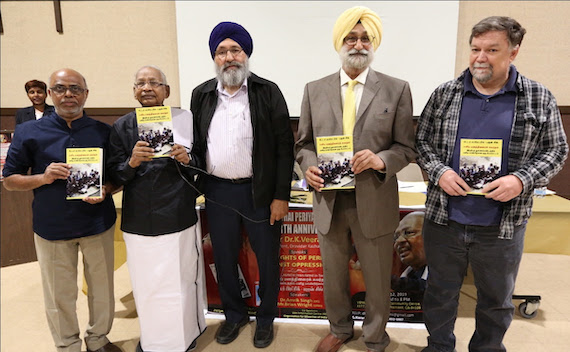 Captivating, co-authored by Pieter Friedrich and Bhajan Singh, traces the history and struggles of the subcontinent’s Mulnivasi Bahujan (original people in the majority), which coalesced in the Sikh Panth (path) that sought — and secured — liberation of the subjugated masses. The book describes Periyar as a great Mulnivasi leader who “arose to further challenge Brahmanism,” explaining that he “agitated for rationalism, self-respect, women’s rights, and against caste.” Examining his agitation against untouchability in Vaikom, Kerala, especially the role of Christians and Sikhs, it states, “With Periyar at the head, the movement developed into one of the most unified in South Asian history.”

“We have heard how the idea of another human being being described as so sub-human that the mere shadow or presence of such a being can pollute the whole village, the whole land,” said co-author Bhajan Singh at the event. “Such sick mentality, dangerous mentality. When Guru Nanak came upon the earth, he declared one mission, and he said: ‘The lowliest of the lowly, the lowest of the low born, Nanak seeks their company. The friendship of great is in vain. For, where the weak are cared for, there Thy Mercy rains.’ So it’s an open declaration of war against the powerful, the Brahmins, and the mighty. Guru Nanak said, ‘I have no business with you. My friendship, my business is with the lowest of society.’”

A view of book release event

Dr. Amrik Singh, a professor of Punjabi and ethnic studies at California State University, Sacramento, spoke on behalf of Sikh Information Centre (SIC). He explained, “Captivating the Simple-Hearted is a sincere scholarly attempt to examine the course of the historical journey of the Indian subcontinent. It lays bare the subtle strands of the socio-political structure of Brahmanical society…. This book blends the vision of Guru Granth Sahib and the Mulnivasi history into one goal that was given to Sikhs by Guru Nanak when he said the Guru’s blessing shall pour forth where the lowest of the low are cared for and protected.”

“I have been finding report after report concerning the tragic plight of Muslims, Christians, and other minorities in India,” said Brian Wright of Organization for Minorities of India (OFMI). “Hindutva — inspired all the more so by Modi and his BJP — has been exerting and expending what seems like an endless reincarnation of abuse and persecution of non-Hindus.” Wright highlighted the problem of Gau Raksha (cow protection movements) and Ghar Wapsi (reconversion movements). “Ghar Wapsi undermines a true free conscience,” he said. “These have become battle-cries of the RSS. Its members seek to protect cows by abusing people and seek to Hinduize the entire country by eliminating all others. India for Hindus is their mantra.” 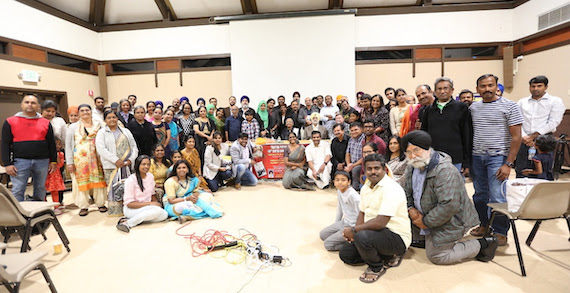 A group photo taken after the book release event

G. Karunanidhy, General Secretary of All India Federation of Other Backward Castes (AIOBC) delivered introductory remarks. He later commented, “The event understood the relevance of Periyar in today’s context of oppression at various levels throughout the world and endorsed the need to propagate the ideals of Periyar globally.”

Ms. Suganthi, an alumna of Periyar Maniammai Deemed University, served as the emcee. The organizers, on behalf of America Quaide-Millet Peravai, presented Dr. Veeramani with a “Social Justice Warrior” award. The event was organized by Periyar International, California Chapter and co-sponsored by SIC and OFMI.

Speaking after the event, Bhajan Singh referenced recent remarks by Indian Home Minister Amit Shah about the need to “write our history,” stating, “The RSS cabal’s agenda of rewriting history to serve its devious ends is being challenged by Mulnivasis who are coming together to learn their own history.”

Captivating the Simple-Hearted, first published in English in 2017 by Sovereign Star Publishing, is available at www.SovStar.com.