Jalandhar: Launching a blistering attack on Narendra Modi led BJP government for using the armed forces to justify their wrong decisions, the Dal Khalsa said the appointment of outgoing army chief Gen Bipin Rawat as first Chief of Defence Staff was much anticipated, taking into account the manner in which the General slammed students hitting the streets in a cold chilling winter to protest against the Citizenship Act (CAA) and NRC. 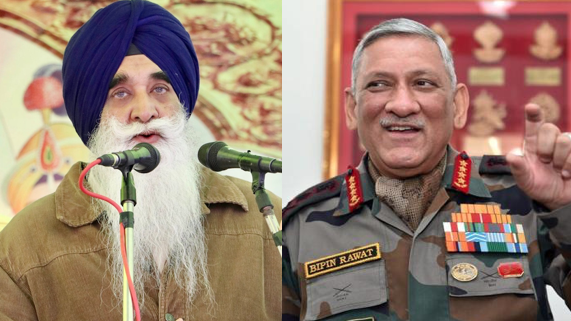 Party president Harpal Singh Cheema said the Modi dispensation has allowed the army chief to enter into civil and political domain only to justify the government’s autocratic decisions. In Nov 2018, the same General’s comments generated controversy when he raised the bogey of revival of Sikh militancy despite militarily being assigned no duty or role in containing the militancy in Punjab. Now, General Rawat was pushed to criticise the protesting and dissenting people, who feel the CAA and NRC would divide the country on communal basis and pave the way for BJP’s march towards Hindu Rashtra. 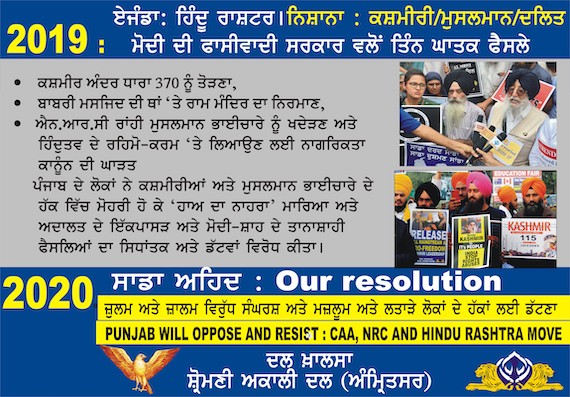 A poster released by Dal Khalsa and SADA (Mann)

Terming the government’s political affinity with armed forces as dangerous for minorities and oppressed nations, he said earlier it was done under some guise, now the BJP has come out with the practice brazenly and blatantly.

Dal Khalsa head was of the view that the Modi dispensation took three drastic and divisive steps in 2019 including stripping Jammu and Kashmir of its special status, craftily engineering the court verdict in Ram Mandir’s favour and amending the Citizenship Act. “All decisions were aimed to terrorize and marginalize the Muslim population and make headway to build India a Hindu country. Even RSS chief Mohan Bhagwat’s repeated sermons that “all 130 billion Indians are Hindus’ leaves no doubt about the real driving force behind the BJP government’s decisions”.

He said the Modi-Shah duo has also ditched the Sikhs too by backtracking on the release of Sikh prisoners during gurpurab celebrations.

Reaffirming their resolve for year 2020, the Dal Khalsa leader said they would continue with their fight for freedom and right to dissent and hold independent belief and resist CAA, NRC and Hindu Rashtra move tooth and nail. “Punjab won’t be part of Hindu Rashtra, come what may.”