Strike by Trade Unions: Points That You Need To Know

Media reports say that rail and road transport in eastern India especially West Bengal and Odisha were seen getting hit early in the morning.

However, Delhi and Mumbai did not see much disruption early on Wednesday.

Here are some basic points about the strike and related issues:

A report on LiveMint notes that [m]ore than 22,000 crore of bank transactions including cheque and cash transactions are set to get hit through out the day.

Some 10 unions from banking and insurance sectors and around 500,000 bank officials are on strike claimed their unions. 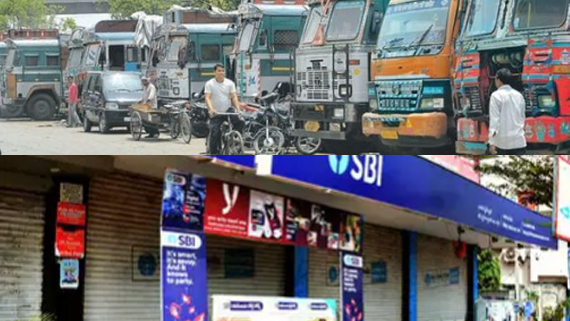 Central Trade unions have a 12 point charter of demands that they claim the government is not fulfilling. The demands include a minimum wage of Rs. 21,000 per month, better job creation, roll back of policies on contractualisation of workforce, tripartite discussion on labour reform, no to privatisation of profit making public sector enterprises and universal pension system.

They have claimed that over 200 million workers from both formal and informal sectors will participate in the nation wide strike through out the Day.

The central government has issues an order asking it’s employees not to join the strike as their service conditions does not allow them to go on strike.

In West Bengal, the ruling Trinamool Congress chief and chief minister Mamata Banerjee has said no to strike too.

In Bangaluru, administration has asked people not to disturb public life.

Representatives of coal unions said 600,000 workers, both permanent and temporary, at coal mines are striking and production loss will be calculated by end of the Day.

Lakhan Mahato, general secretary, United Coal Workers Union said their strike is on despite a call from Coal India Ltd management to not go on strike.