Tarn Taran: Two persons were killed and 10 injured when a blast occurred in a tractor-trolly during a Nagar Kirtan near Daleke village- about 10 kms away from Tarn Taran. 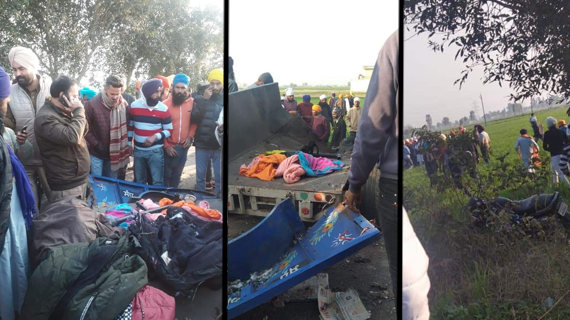 As per information collected from various sources, the Nagar Kirtan had started from village Pahuwind to mark birth anniversary of Baba Deep Singh Ji Shaheed.

As per information youth were carrying fire crackers in a tractor-trolly along with potash (usually used to create blast sound). It is believed that crackers and potash caused blast which caused death of (at least) two persons, while injuring others.

Punjab Chief Minister Captain Amarinder Singh has ordered a magisterial probe into the fire crackers explosion in a trolley during a Nagar Kirtan that killed two persons and left nine injured in Taran Taran on Saturday.

Expressing shock and grief over the tragic incident, the Chief Minister has asked the Sub Divisional Magistrate (SDM) Tarn Taran to conduct a thorough inquiry into the incident in order to fix responsibility and ensure justice for the victims.

The Chief Minister has also announced an ex-gratia grant of Rs. 5 lakh for the kin of the deceased and free treatment to the injured, who are admitted in the local Civil Hospital and the Guru Nanak Dev Charitable Hospital, according to an official spokesperson. He also directed the Deputy Commissioner, Tarn Taran, to ensure that the injured get the best possible treatment.

Capt Amarinder has also directed the Civil and Police administration of Tarn Taran district to extend all possible help to the families of the victims. The SSP Tarn Taran has been asked to carry out post mortem proceedings expeditiously so that bodies of the deceased could be handed over to their families without delay.

he powerful explosion occurred in a trolley near Daleke Mor, Palasaur, Police Station City Tarn Taran. The Tractor-Trolley was a part of the Nagar Kirtan going from Pahuwind in police station Bhikhiwind to Gurdwara Tahla Sahib in Chattiwind. While initial reports suggest some youngsters were exploding makeshift firecrackers in the trolley, thus triggering the explosion, the SDM’s inquiry would ascertain the full facts of the case, said the spokesperson.

SGPC chief Gobind Singh Longowal has expressed grief over the blast incident. He said that the SGPC shall extend free treatment of injured persons at Guru Ramdas Hospital in Amritsar.