Hoshiarpur/Ludhiana: Rumours are circulating in certain areas of Punjab against Muslims in general, and Muslim Gujjars in particular.

Reports emanating from Mukerian, Hazipur and Talwara areas of Hoshiarpur district that Gujjars were stopped from selling milk or grazing their cattle. There are reports that Gujjars were even beaten at some places.

Around three days back, announcements were made in some villages of Hazipur block directing residents not to buy milk from ‘strangers’.

In some villages, these announcements were made on behalf of village Sarpanches. 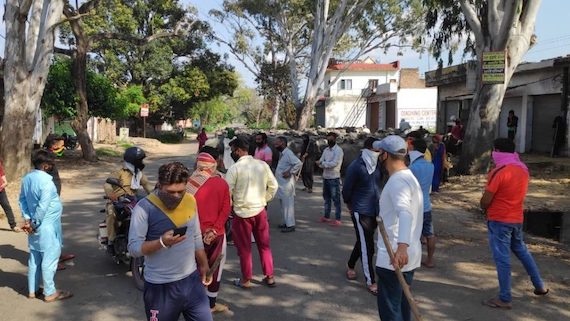 Gujjars stopped by locals from carrying their herd for grazing on Talwara-Mukerian Road in Hajipur in Hoshiarpur district on Sunday.

Announcements were also made that residents could stop and question any stranger person as some strangers were allegedly moving around in the areas and were contaminating door handles with saliva.

An announcement made on Tuesday, under the name of the Sarpanch a village in Hazipur block of Mukerian Tehsil said that stranger persons were contaminating door handles with their saliva. It further said that such strangers were throwing currency notes after contaminating them with their saliva. The announcer said that the Sarpanch has authorised villagers to stop and question any stanger found roaming around in the village.

A report in The Wire notes: [s]everal families of the Muslim Gujjar (mink selling) community in Hajipur and Talwara blocks of Hoshiarpur district were allegedly beaten by unruly groups in many Hindu majority villages.

According to The Wire, Mukerian DSP Ravinder Chaudhary attributed these incidents to fake news that the coronavirus is spread through the milk being sold by the Gujjars. He said the situation was now “under control”. “The (Gujjar milkmen) are free to sell their milk,” the DSP maintained.

However, local Gujjars maintain that they are facing problems as they are being told to not to go around to sell their milk or graze their cattle.

“The administration should stop these Gujjars, as there is a lockdown all over and nobody is allowed to move out,” she said.

Hoshiarpur deputy commissioner Apneet Riyait took notice of the issue and issued a warning on Monday (April 6) that discrimination on basis religion was simply not acceptable and that the district administration would act tough in case this continues.

“Communal discrimination would not be allowed at any cost”, the DC said adding that she had received several complaints that Gujjars were being stopped from supplying milk in Punjab.

“It has come to my notice that some cooperative milk societies have also refused to accept milk from people of a particular community which was very unfortunate. No society would discriminate or they can face strict legal action,” she said.

Two Arrested in Ludhiana for Rumours Against Muslims:

In yet another incident, the Ludhiana police have arrested two women under Section 188 of the Indian Penal Code (IPC) for spreading rumours that the Muslims in the area were “spreading the coronavirus by shaking hands”. The women asked people to “guard themselves against the Muslims with lathis”.

The women, who were arrested by the Jamalpur police in the Ludhiana suburb, were identified as Pushpa Rani, a local private school principal and Sharda Vidya. Jamalpur’s Mundia police ‘chowki’ incharge sub-inspector Harbhajan Singh on Monday told the local media that the police were also on the lookout for more people, including one Kanchan, who they said was spreading rumours and communal messages through WhatsApp.

The FIR, in which 20 persons were named, quoted a Whatsapp message in Hindi. It says Muslims are entering the houses and spreading the coronavirus infection by “forcefully shaking hands”. It claimed that a gurdwara had asked the people to “keep any kind of weapon or baton” for self-defence.

Habib-Ur Rehman, an imam at a mosque in the Jamalpur locality, told The Wire that he had also lodged a verbal complaint with the police against some identified men who had humiliated him “for being a Muslim”.

“Three-four men surrounded me in a street and insulted me by saying that Muslims are spreading the coronavirus,” the Imam said.

The Imam said that the local police have acted swiftly and brought the entire situation in Jamalpur under control by arresting some of the culprits.

In a statement issued by the Department of Public Relations, Punjab it is said that [t]he police is also taking stern action against attempts to use social media to spread communal strife.

In this statement Punjab DGP Dinkar Gupta said that “a sedition case was registered on Friday (April 3) against a Ludhiana resident”.