Iftar was hosted at the Gurdwara Sahib for the members of Muslim community on the opening of 29 Roza on May 23. Due care of physical distancing was taken in wake of COVID19 pandemic. 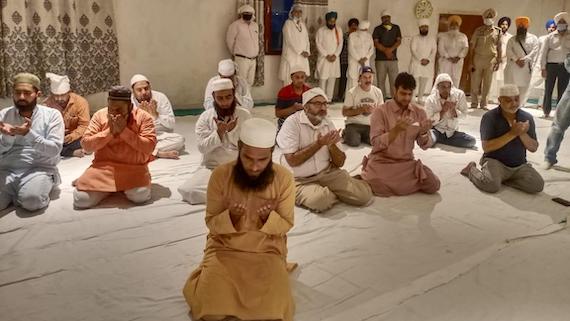 “The Gurbani Path was going on in main hall while namaz was offered in another hall of gurdwara by our Muslim brothers. The main purpose of organising the party was to reconfirm that we all are united,” said Narinderpal Singh, Head Granthi of Gurdwara Sahib.

Members of Muslim community said visiting the historic gurdwara was not a new thing for them as they had been coming to this gurdwara since their birth.

“Every time whenever pass this gurdwara, we bow our head because our religion has been teaching us to respect all religions,” said a local member of Muslim community after offering namaz in gurdwara.

Notably, Gurdwara Haa Da Naara was built in the memory of Nawab Sher Mohammad Khan of Malerkotla who had opposed the execution of Chhote Sahibzadey by Suba Sirhind Wazir Khan. Wazir Khan had tried to convince Nawab Sher Mohammad Khan to kill Sahibzadey to revenge the killing of his brother but Nawab Malerkotla rejected this proposal and said that killing of innocent children was against Islamic teachings.

Though Nawab Sher Mohammad Khan could not save lives of Sahibzadey and even fought against Sikhs for Wazir Khan, and was killed in a battle with Sikh army under the command of Baba Banda Singh Bahadur, still Sikhs remember him for raising the voice (haa da naara). Gurdwara Haa Da Naara in Malerkotla marks the memory of Nawab Sher Mohammad Khan.