Amritsar: The Shiromani Gurdwara Prabhandak Committee (SGPC) men reportedly resorted to use of force against Sikhs who had come to join a peaceful dharna outside the SGPC’s head-office demanding registration of case against “main culprits” in missing Saroops issue. Dharna was started yesterday by various Satikar Committees.

This is why SGPC was abolished by the 1986 Sarbat Khalsa, this malesh entity will always attack Panth dardi to maintain its state sanctioned authority. The hate for filming is indian nationalist energy hiding behind weaponising “besti”. pic.twitter.com/70ub8wbfgJ

The demonstrators are demanding registration of criminal case against “main culprits” identified by a probe committee constituted to probe the issue of missing Saroops of Guru Granth Sahib. 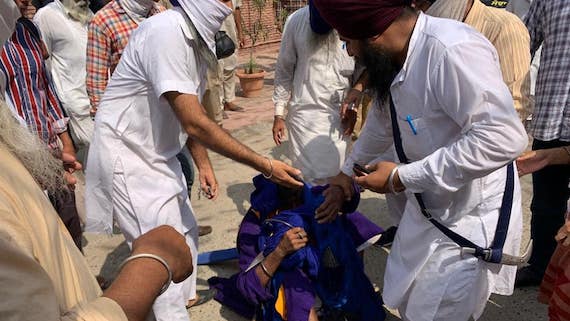 SGPC men reportedly used force to remove these Sikhs from their site of protest. An elderly Sikh reportedly sustained injuries during this incident.

It is notable that on 27 August the SGPC had announced to file criminal cases against various persons, who were identified as culprits in the probe panel’s report. Later the SGPC took a U-turn on this issue and said that it won’t file criminal case against the culprits.