Brampton, Canada: Media reports have highlighted that 36 candidates contesting the municipal elections in Brampton have their linked to Punjab. Brampton has a huge immigrant population from Punjab.

A report in The Tribune (TT) notes that all eyes are on Wards 9 and 10 where seven of the 10 contestants for the post of councillor originally hail from Punjab — Mangaljit Dabb, Dharamveer Gohil, Mahendra Gupta, Rohit Sidhu, Harkirat Singh (for city council) and Rajbir Kaur, Harnek Rai, Gurpreet Dhillon and Vicky Dhillon (for regional council). 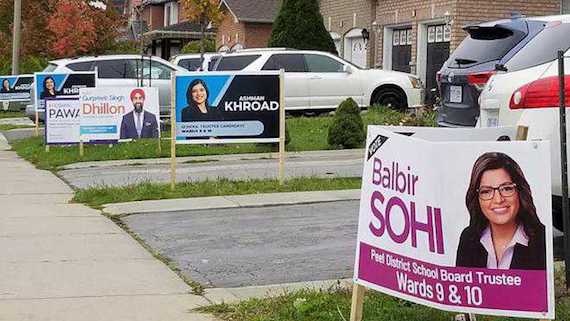 “The main contest seems between incumbent Gurpreet Dhillon and Vicky Dhillon, who was a city councillor for eight years till 2014. For the post of trustee, Peel District School Board, there appears a keen fight between Balbir Sohi and Satpal Singh Johal”, notes The Tribune.

“Already, the signboard war and door-to-door campaign has reached its crescendo in the city known for a poor voter turnout, hovering between 35 and 36 per cent in the past. The candidates are busy either hosting or attending barbeque parties and weekend get-togethers”, TT report notes.