New York: The Sikh Coalition and the Jakara Movement submitted a letter on behalf of 52 Gurdwaras (Sikh houses of worship) to the California Department of Education, the Instructional Quality Commission, and the Ethnic Studies Model Curriculum Advisory Committee in favor of Sikhism’s meaningful inclusion in California’s Ethnic Studies Model Curriculum. The sign-on letter is in support of a request by the two organizations asking that the model curriculum include 1) positive examples of Sikh contributions to American society over the past 125 years and 2) a lesson plan about the Sikh American community and its contributions to California.

“Approximately 250,000 Sikhs, or roughly half of those in the United States, live in California,” said Satjeet Kaur, Sikh Coalition Executive Director. “We need our positive contributions recognized and accurately taught in classrooms–not just for the safety and visibility it will bring Sikh students, but to improve the education of all children.” 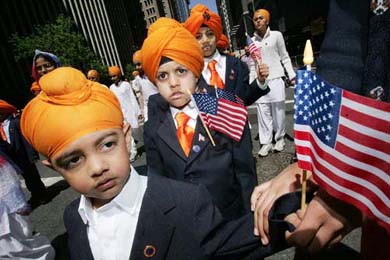 Sikhs have lived in California for more than 125 years. The first gurdwara in the United States was founded in Stockton, California, in 1912 and still welcomes worshippers and visitors today. Additionally, many notable Sikh Americans have ties to the state. Dalip Singh Saund, the first Asian American to serve in Congress–who also identified as Sikh–served California’s 29th congressional district from 1957 to 1963. Sikh physicist Narinder Singh Kapany, who is widely considered to be “the Father of Fiber Optics,” has worked in universities across the state. And the first female Sikh mayor in the United States, Preet Didbal, was elected to lead Yuba City, California, in 2017.

Unfortunately, the prior draft of the California Ethnic Studies Model Curriculum neglects this rich history, only referencing Sikh Americans in passing as victims of bigotry and backlash following the September 11, 2001 attacks. This led to gurdwaras across the state collaborating to speak out for more meaningful inclusion in the curriculum, as well as a petition for the same that already has garnered several hundred signatures, which will be presented to the State Board of Education later in 2020.

“Sikh Americans have a long and proud history in California,” said Naindeep Singh, Executive Director of the Jakara Movement. “From freedom fighters to revolutionaries, farm laborers to engineers, and Congressmen to physicians, they have shaped the state in numerous ways and continue to play an important part in building its future. Victimization and marginalization have never been the defining traits of the Sikh American experience, and that’s why we are dedicated to ensure that our stories are told.”

This effort to positively impact California’s curriculum content follows a 2016 victory ensuring Sikhism’s inclusion in California’s History-Social Science Framework. After similar recent successes in Kansas and Indiana, 14 states–and approximately 45 percent of public school students in the country–now have the opportunity to learn about Sikhism.