74% of seized drug goes “missing” from Police stations in India

New Delhi: Reports have come up that around 74 percent of drugs seized by the police across Indian subcontinent goes missing from police station “malkhanas”. Senior Advocate Aditya Sinha who is reportedly assisting the Supreme Court of India (SCI) in a case related to drugs informed that court that pilferage of narcotic drugs from police godowns was rampant. 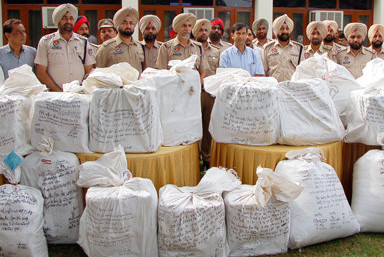 Advo. Aditya Sinha told the a Bench comprising Justices TS Thakur and Kurian Joseph that 60,00,000 kilogram (kg) of drugs were seized by the police in last 10 years in various states of Indian subcontinent, but only 16 kg was destroyed or disposed of.

Most of the seized contraband was stored in police ‘malkhanas’ which lacked security and, as a result, the narcotics was stolen by unscrupulous elements by replacing the pilfered quantity with substances like cattle dung, he said.

Firozepur cop was caught stealing drugs from Malkhana in May:

In May 2015 a Punjab police head constable has been arrested for allegedly stealing drugs from “malkhana” (property room) of police station and supplying them to peddlers.

According to a news published by Times of India (TOI) on May 25, 2015 HC Sher Singh alias Shera, posted at Mamdot police station, was arrested last week following a revelation made by a drug peddler, Sukhwinder Singh, nabbed by the police recently. He told cops that he used to buy narcotics from a cop who stole them from the “malkhana”.

TOI had quotes sources saying that 260g heroin, valued at about Rs 1.3 crore in the international market, and a cash of Rs 4.20 lakh was seized from Sukhwinder during the search of his house at Sunrise Colony in Ferozepur. They said a large quantity of heroin, recovered by the Border Security Force from the border areas in Ferozepur was lying in the “malkhana” of Mamdot police station.