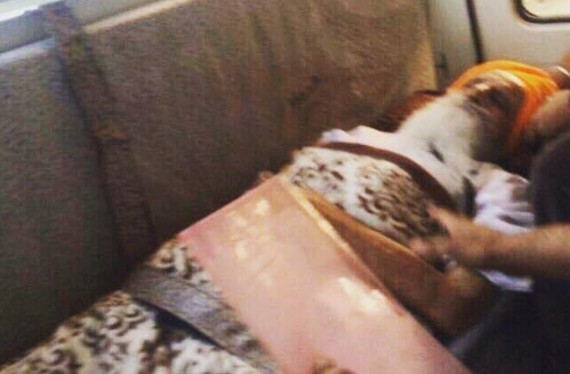 Bapu Surat Singh in ambulance after being taken into custody on July 20, 2015. [File Photo]

Following are some excerpts from the news (readers may read full piece on front page of 21 July, 2015 Chandigarh Edition of HT):

“In a major breather for the Punjab government, police on Monday finally managed to shift the fasting Sikh hardliner Surat Singh Khalsa to a hospital in Ludhiana”.

“The government, which is facing tremendous pressure from radicals who are demanding premature release of Sikh political prisoners, has now in a way gained an upper hand over the hardliners.

By outsmarting the hardliners through this firm police action that began on Saturday night, deputy chief minister Sukhbir Singh Badal, who also holds the home portfolio, has tried to send a strong message to radical fringe elements who were trying to make a political capital out of a sensitive and delicate issue.

Also, the government has attempted to demonstrate that it has administrative will, necessary political sensitivity and strength to deal with issues of such delicate nature. Before admitting Khalsa to Lord Mahavir Civil Hospital, police in a sudden and swift operation arrested key radical leaders and over two-dozen potential troublemakers who had been camping at Khalsa’s Hasanpur village house in Ludhiana district.

Khalsa is on “fast” since January 16 seeking release of political prisoners, a demand which is being backed by radical outfits leading to a major standoff between the state government and the hardliners”.

Note: Sikh Siyasat News (SSN) respects everyone’s right/freedom of expression, including any media/newspaper or journalist/reporter etc. But SSN is of the view that it is equally important to raise concern against abuses/misuses of this freedom.