He further said that there was a secret agreement between the Congress and the Badal Dal to let each other win one seat in byelections. 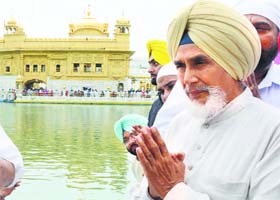 “The people had started talking about such a consensus in the run-up to the elections and the results have proved that those talks were correct,” he added.

He further said that the Aam Aadmi Party (AAP) was not ready for the byelections and that was another reason behind the party’s poor performance.

AAP state convener said, “We will contest the 2017 Assembly elections with preparedness and defeat the Congress and the Badals”.

He said the people of the state were fed up of the corruption and crime unleashed by the ruling government.

“Even as employees of the Information Centre at the [Darbar Sahib] did not present “siropa” to him, as is the norm during the visit of prominent leaders and other dignitaries, Tarlochan Singh Tur honoured him outside the centre” notes a news reported by The Tribune.