New Delhi: The Aam Aadmi Party (AAP) government in Delhi wants a referendum on the issue of statehood for Delhi. Delhi chief minister Arvind Kejriwal has reportedly sent a note to various departments asking them to “draft a law and create machinery for” such a practice.

According to a senior officer, Delhi CM Arvind Kejriwal had recently discussed the referendum plan with his cabinet colleagues. The note from the chief minister said “Do a referendum in Delhi. Draft a law and create machinery for referendum”. 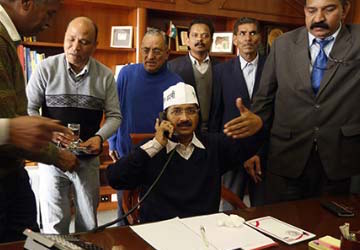 Arvind Kejriwal has asked the urban development department to come up with a feasibility report specifying a timeline. The department was asked to give various options available to the government for conducting such a referendum.

The law department has also been asked to discuss the legal issues regarding the matter.

Demanding statehood for Delhi, law minister Kapil Mishra on Monday said, “Legal complication will not come. Only BJP and Congress will back-track from their promise which they made. It is a political issue.”

Demand of statehood for Delhi was part of the Aam Aadmi Party’s manifesto and even other political parties like BJP had been raising the issue.