Reacting to ruling party’s move Aam Aadmi Party (AAP) in a written press statement said that SAD’s district-wise Dharnas in protest against the ‘hollow’ allegations of Delhi Government’s role in the demolition of Bhai Mati Dass Chabbil at Gurudwara Sis Ganj Sahib turned a complete ‘flop show’. Party said that the (alleged) failure of the dharnas should be an ‘eye-opener’ for Sukhbir Badal to understand that people are not ‘fool’ to get trapped in their ‘political drama’.

“Reports from all the districts show that only a few Akali workers gathered in the dharnas and no participating of ‘Aam Aadmi’ was seen in these protests to shed ‘crocodile tears’ to lodge protest against Kejriwal”, AAP leaders Sanjay Singh, State Convenor of the party Sucha Singh Chhotepur and Sagrur MP Bhagwant Mann stated here today. 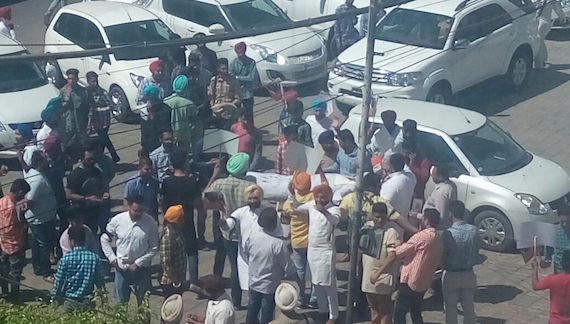 Badals should take these ‘flop shows’, as an ‘eye-opener’ for themselves to foresee their prospective humiliating defeat in the forthcoming assembly polls in 2017, AAP leaders said.

AAP leaders said people of Punjab are intelligent enough to understand, who was behind the demolition of Bhai Mati Dass Chhabil. There was not even an iota of fact in the allegation that Delhi Government ordered demolition, rather it was BJP controlled Municipal Corporation of Delhi (MCD), which went out for demolition at historic Gurudwara, AAP leaders reiterated.

Fear & phobia of AAP could easily be noticed on the faces of Akali leaders during protests, which forced them to fumble with words while making ‘hollow’ allegations against Delhi Government, AAP leaders said.

Training their guns towards SAD Chief Sukhbir Badal, who expressed that he was deeply hurt on the demolition of Bhai Mati Dass Chhabil at Sis Ganj Gurudwara, Sanjay Singh quipped, why he (Sukhbir) wasn’t hurt when there were series of attacks on the Shri Guru Granth Sahib?, Where was he when police opened fire on the innocent and peaceful Sikh protestors in which two of the Sikh youth were killed? Why his heart did not melt and got hurt, when two of the innocent Sikh youth were arrested and tortured by the police by falsely implicating them in the case of sacrilege?

Instead of enacting the ‘political drama’ Sukhbir should have reacted to save the farmers, who were committing suicides by heavy debts due to faulty policies of state and central governments, Sanjay Singh said.

Instead of extending the helping hands to farmers, Agriculture Minister of SAD was busy to mint money by supplying spurious fertilizers to farmers and ultimately the Agriculture Director was made the scapegoat for entire racket, they said.

Time is ripe for Badals to book family room in their 7 star hotels permanently, as they would not be able to show their faces to public after 2017 assembly polls, AAP leaders said