New Delhi: As per the media reports the Delhi unit of the Aam Adami Party here on Monday won the north Delhi’s Bawana assembly seat with a fairly comfortable margin of 24,000 votes. The wining of the seat is stated to have worked as a solace for the Delhi chief minister Arvind Kejriwal after suffering back to back debacles form the last 4 months. 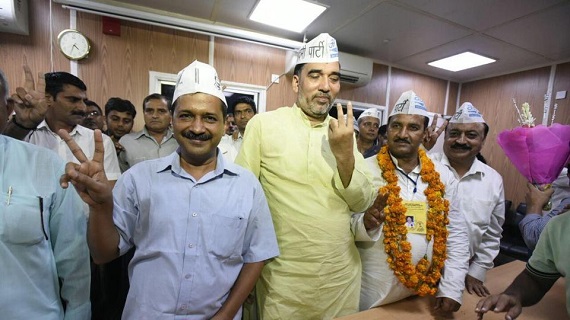 Although the Congress came a distant third, the party saw the bypoll results as encouraging because it trebled its vote share over the last assembly election in 2015 at the expense of the other two parties, media sources reported.

Bawana, a mix of slums and villages to the city’s north, went to by-elections after the AAP’s sitting MLA Ved Parkash quit the party and became the BJP’s candidate this time.

One of Delhi’s largest constituencies by voters, Bawana was among four seats that held bypolls on August 23.

Before the Bawana win Arvind Kejriwal’s party suffered defeats in the assembly polls in Goa and Punjab in March and the city civic polls a month later.

Meanwhile, a preliminary assessment by the BJP indicated at the insiders’ role had caused party’s defeat. The report identified at least 18 party members who did not work in “interest of the party”.

The most notable name mentioned in the report was West Delhi MP and Bawana by-election incharge Pravesh Verma who has been accused of not devoting ample time in the constituency, media reports said.

While referring to the communication document an English tabloid reported that  four former BJP MLAs – Kulwant Rana, Manoj Shokeen, Neeldaman Khatri and Rajesh Gehlot – who were assigned key responsibilities in the elections and are blamed for the loss. Notably, all of these leaders come from the villages. It is noteworthy that Khatri is currently the district president and was a key person overseeing the poll preparations.