Chandigarh: Aam Aadmi Party (AAP) on Wednesday announced that the party would initiate Punjab dialogue under the banner “Bolda Punjab” on April 23 with various segments of the society to formulate a policy and shape its manifesto for the forthcoming assembly polls slated for 2017.

Addressing a press conference at Press Club Chandigarh, AAP’s India level Spokesman and in charge Punjab party affairs Sanjay Singh said time has come to inform the people of Punjab the kind of programme and model the party wanted to give to the state for its inclusive and holistic development in the next five years once it came to power. 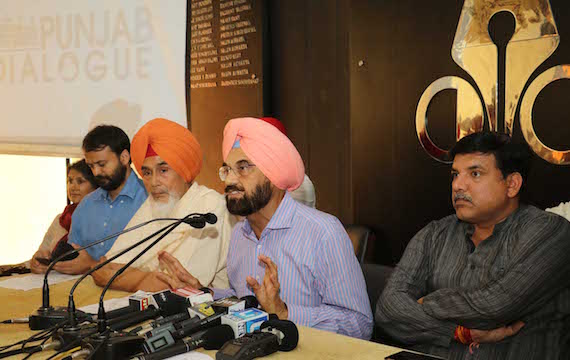 “What kind of solutions the party could offer to people of Punjab for elimination of drugs, to resolve the unemployment problem in the youth and how the spate of suicides could be stopped among the farmers. These issues would be discussed at length with the people as well as with the experts during the Punjab dialogue”, said Sanjay Singh while revealing senior journalist, Kanwar Sandhu who held top positions in country level and regional newspapers and news channels would head the Manifesto Committee to initiate the Punjab dialogue with various sections of the society.

Giving details journalist turned politician Kanwar Sandhu said the manifesto committee headed by him would reach out to 10 different segments of the society in the days to come to learn about their problems and hardships they have been facing in Punjab under various governments.

“The party will release the youth manifesto by first week of June and we will try to have AAP’s national convener & Delhi Chief Minister Arvind Kejriwal to do the honours”, Kanwar Sandhu said.

Kanwar Sandhu said in order to have the interactions in a free, fair and transparent manner he would want people from all walks of life to come and actively participate in the dialogue. This would help the party prepare a document by the people of the people and for the people.

He said that AAP has also identified issues to be discussed during the interactions which include spate of suicides being committed by farmers, widespread menace of drugs and narcotics, unemployment of the educated youth, corruption in public offices, deteriorating state of health and education, rule of mafia in the sand, land, liquor, drugs, transport and cable network business, rising crime against women, growing atrocities against Dalits and housing woes.

Speaking on the occasion senior AAP, leader Ashish Khetan said for AAP manifesto is a sacred document like a religious scripture. “We will do our best to implement each and every promise we make in the manifesto the way we have done in Delhi”, said Khetan.