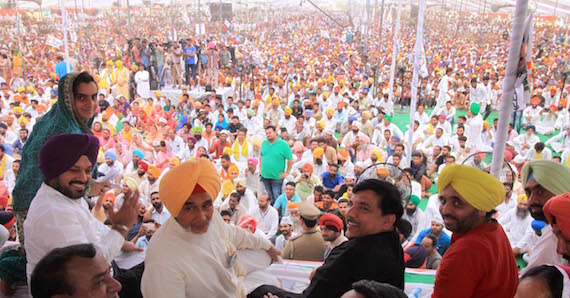 A written press release issued by the Aam Aadmi Party about the conference reads as follows:

Massive crowds at Talwandi Sabo on the Baisakhi Day at the Aam Aadmi Party’s political conference on Wednesday has made it amply clear that the party is all set to form the next government in Punjab in 2017 by dislodging the SAD-BJP alliance.

A large number of people thronged at AAP’s political conference at Talwandi Sabo on their own without being induced by either the transport or the food. Unlike other traditional political parties the AAP didn’t even widely publicized to make the Baisakhi day a grand success by calling on people to come in large numbers.

Speaking on the occasion AAP National spokesperson and in-charge of Punjab’s Party affairs Sanjay Singh said the massive gathering at Talwandi Sabo has proven for once and for all to both Parkash Singh Badal and Capt Amarinder Singh that AAP would win all 117 seats in the ensuing assembly polls.

“After seeing such a mammoth gathering I will also convey to Delhi Chief minister Arvind Kejriwal that Punjab is all geared up to break AAP’s record of Delhi by winning all the 117 seats”, said Sanjay Singh. 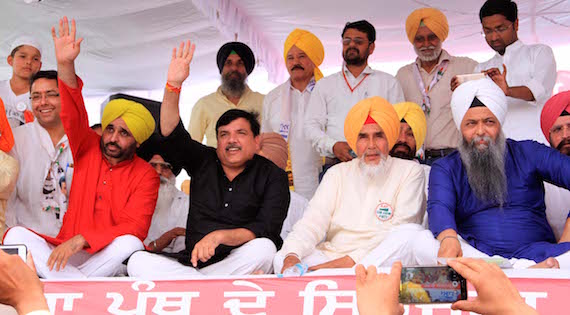 Singh said a few journalists asked me which political party he thought would be in direct contest with AAP in 2017. “I think by seeing such a sea of people they must have got the answer to their own question how AAP will completely sweep Punjab in 2017″, added Sanjay Singh.

Sanjay Singh said Akalis and Congressmen are misleading people by spreading the word that the AAP leaders lacked experience and hence they would not be able to govern. “Yes we have no experience to distribute money, liquor and other gifts during elections. We have no experience to distribute drugs as cabinet minister Bikram Singh Majithia does. But with our experience we have already made a huge difference in the health and education sectors in Delhi”, said Sanjay Singh.

Sanjay Singh called upon people not to get scared by the Akalis who are implicating the AAP supporters in false cases. “Once the AAP government is formed in Punjab not only of AAP supporters but all false cases will be taken back’, he assured.

“These Badals are running the Punjab government like their private limited company where all family members are cabinet ministers. In AAP’s constitution only one member of a family can get a party ticket’, said Sanjay Singh.

Delhi MLA and CPS, Jarnail Singh said Akalis and congress both are misleading people on the demolition of ‘piao’ outside Gurudwara Sis Ganj Sahib in Delhi “In fact it was BJP’s advocate who has given an affidavit in the Delhi High Court about the piao to be demolished. I dare Sukhbir Badal to ask his wife and cabinet minister in Modi government to resign if the Akalis were actually hurt by the demolition of the piao”, said Jarnail Singh.

“The AAP government on the other hand will build a memorial at the site of the Piao and will also not allow anyone to demolish Bhai Mati Dass chowk. Sukhbir Badal has become completely an ‘Amli’ (a drug addict) and has lost sense of understanding of right or wrong”, said the Delhi MLA.

Jarnail also compared Sukhbir Badal with Jagdish Tytler and Sajjan Kumar holding him responsible for the Behbal kalan firing in which two Sikhs were killed in Punjab Police firing. “Sukhbir is no less than Tytler and Sajjan who were prime accused in the 1984 Sikh genocide”, he added.

AAP, Convenor, Punjab, Sucha Singh Chhotepur said Akalis and Congress are deliberately trying to rake issues pertaining to SYL and Piao to mislead the people because they know they have got nothing positive to offer to the people of Punjab. Pioa was demolished by the incompetence of BJP controlled MCD government. Besides the DSGMC did not follow up the case properly in the high court which led to the demolition of the piao.

“Even Bargari incident was deliberately created by the Akalis where sacrilege of Guru Granth Sahib had occurred last year, to divert the attention of the people from other burning issues and SAD-BJP Govt’s failure”, said Chhotepur.

Chhotepur lambasted Sukhbir Badal for comapring operation bluestar with the demolition of Piao at Delhi. “This shows Sukhbir has no understanding of operation bluestar which was such a huge tragic incident for the Sikh masses where hundreds of Sikhs died. In fact the Behbal kalan incident in which Sukhbir Badal ordered firing should be termed as mini bluestar”, said Chhotepur.

As soon as Sangrur MP, Bhagwant Mann stood up to speak the crowds were also on their feet clapping and cheering for their popular leader.

Mann in his own inimitable style expressed concern about the degeneration of Punjab in every sphere. “What will happen to Punjab which is being ruled by ‘Blackias and Smackias’, where farmers are being humiliated and women are not being safe”.

“No one in the world can say today that Punjab is the same prosperous state which it used to be many decades before. One can see Punjab being projected prosperous only on Badal’s PTC news channel”, said Mann.

Mann also made fun of SAD holding dharnas on Tuesday all across Punjab against AAP for demolishing Piao in Delhi. “I came to know that in their dharnas the Akalis could not even mobilise more than 40 to 70 people that too their own party cadres. Later on someone told me that Akalis were actually training to hold dharnas as this was the only job they would be left with in the coming 10 to 15 years’, Mann said while making a mockery of Akali demonstrations.

Mann said people are also fed up from sukhbir Badal. “In the constituency of his Father and CM, when Sukhbir Badal got up to speak people not only hooted but also wanted to hear local artists Labh -Heera rather than him”.

Coming down heavily on Capt Amarinder Singh, Mann said the former is a non serious politician and doesn’t care about the people who elect him. “When he was elected MLA in 2012 he didn’t go to Vidhan Sabha at all. Similarly he didn’t enter Lok Sabha after winning from Amritsar as MP. This shows he is only interested in winning but not keen to take up people’s issues in the Vidhan Sabha or the Parliament”, said Mann.

Mann said even Punjab Police a strong force of 75,000 was completely fed up from Sukhbir Badal. “They are also from our families and are not happy to register false cases against innocent people. But people like Sukhbir and Majithia force them to register false cases to settle political scores. Once AAP comes to power we will take care of them and even give them overtime if they work more than the requisite hours of duty’, said Mann.

Noted artist and Senior AAP leader Gurpreet Singh Ghuggi while speaking on the occasion said seeing such a sea of people he said he was sure that AAP has announced its arrival Punjab. “There is no further evidence required by anyone to say that AAP would surely form the next government in punjab’, said Ghuggi.

“Badals have become even worse than Ahmed Shah Abdali, a muslim raider who used to come from Central Asia to loot and plunder the wealth of Punjab. ” Badals have captured all businesses may it be cable, transport, sand, gravel, liquor, hotels and even the media. The time has come to throw them out of power so that people’s rule can be established in Punjab’, said Ghuggi.