Chandigarh: The Punjab unit of the Aam Adami Party (AAP) has here today issued a press note in which it has about its preparation for the Gurdaspur Lok Sabha by-election and how its volunteers, legislators and senior office bearers are ready to take the contest head on against Congress and Badal-BJP alliance. 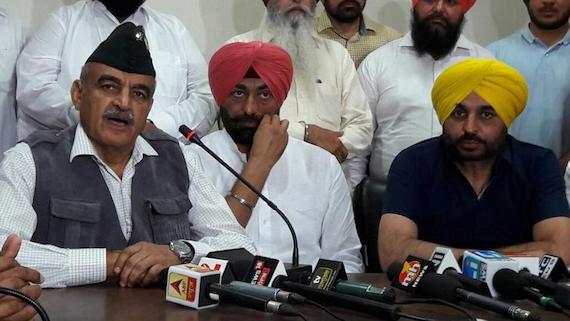 Party president and MP Bhagwant Mann and Leader of Opposition Sukhpal Singh Khaira said that the party under a well planned strategy have deputed senior leaders and its charged up volunteers to spread across all 9 assembly segments of the Gurdaspur Lok Sabha seat for an aggressive poll campaign.

Bhagwant Mann while acknowledging a huge response AAP candidate Maj. Gen. (rted), Suresh Khajuria is getting from the people of Gurdaspur Lok Sabha seat said the ensuing bypoll is very different from the Vidhan Sabha polls of Punjab held nearly six months ago.

” By the sheer response of the people it looks as if the people of Punjab and especially of Gurdaspur Lok Sabha seat have already been fed up from the Capt Amarinder Singh government which has miserably failed to live up to the expectations of the people”, Bhagwant Mann reportedly said.

Furthermore, he stated that he had never seen a newly elected government loosing good will of the people so early and fast as Capt Amarinder government has not been able to fulfil even a single poll promise it made prior to the Punjab polls.

“Congress party under Capt Amarinder had given written assurances to the people of Punjab promising  to waive off the farmers’ debt, government job to each household, Rs. 25,00 monthly pension, to clear backlog of the sugarcane crop payment and smart phones to the youth. Unfortunately none of the aforesaid promises by Capt Amarinder government has so far been fulfilled much to the disappointment of the people of Punjab”, AAP chief adds to his statement.

Additionally, Sukhpal Singh Khaira asked the entire leadership and volunteers of AAP to go to reach out to each and very household of Gurdaspur Lok Sabha constituency to expose the bundle of lies the congress party spread among the electorate of Punjab only to grab power.

“Both congress and SAD-BJP alliance were unable to field a local leader to contest the bypoll. That is the reason BJP candidate SS Salaria and Congress candidate Sunil Jakhar had to brought from outside Gurdaspur”, he said.

” Only Maj. Gen. Khajuria belonged to Gurdaspur and thats why he understands the local problems of the people far more easily than the opponents”, he claims.