May 28, 2016: In another session of ‘Punjab Dialogue’ with Youth initiated by Aam Aadmi Party (AAP), unemployment, unprecedented mushrooming of private educational institutions and outdated syllabus of Punjab Schools of Education Board (PSEB) have emerged as key concerns of the Youth of Punjab.

While initiating the dialogue, Sandhu said unlike other traditional political parties, Aam Aadmi Party (AAP) believes in finalizing its poll manifesto, which can be termed as an agreement of upcoming government with the People of Punjab, by involving them to finalize the steps, which they want to be taken by their Government in a time framed manner. “There is a need of political revolution for change in the political system and Delhi has already ignited the revolution as an example for entire nation”, Sandhu added. 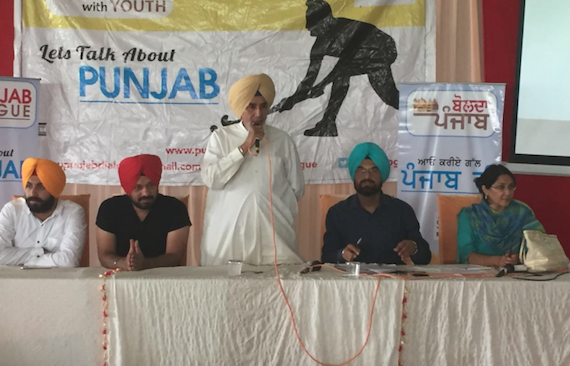 Chander Suta Dogra gave a presentation citing how the revolution in the field of education and health was brought in Delhi and vowed that same model of development would be applied in Punjab by AAP, once voted to power.

State Convenor of AAP, Sucha Singh Chhotepur said that currently youth of Punjab is direction-less, which resulted in the menace of drug in the border state. AAP would channelize the immense energy among the youth by providing them an adequate opportunity for not only jobs, but for the self-entrepreneurship too.

“Education System in Punjab has become so irrelevant that posts of Medicos, Teachers are lying vacant and ITIs and Polytechnics have become defunct and failed to attract youth”, Sandhu said. One of the young Girls, Rupinder Kaur revealed that although the Union Government had sent a grant of Rs 600 crore for the scholarship of SC/ST students, but the funds were diverted by the state government, depriving poor students of an opportunity for higher studies. Sandhu said that next AAP government probe the issue and ensure that funds allocated for students should be spent with its optimistic use. Another student Manjit claimed that syllabus of Punjab School of Education (PSEN) has become outdated and students of these schools fail to compete with the standard of schools affiliated to CBSE. On this Sandhu said that a Committee of the renowned Educationalists would be constituted to set the syllabus of Government Schools in such a way that the students of Government schools could not only match the standards of private schools, rather beat them in the competition exams. Sanjeev Sharma, another youth complained of the capability and ability to impart quality education to the students of Government schools.

“At present the state government is more interested to bring more and more private universities and other private educational institutions by shredding its responsibility to impart quality education in the Government’s schools and colleges”, Sandhu said claiming that AAP Government would reverse the system and emphasis on the improvement of educational institutions of government.

Sandhu said inadequate mushrooming of the private educational institutions would be checked by the AAP Government and skill development centers would be developed in the state to develop entrepreneurship in the state. A comprehensive youth oriented policy would be constituted so that instead for looking for foreign dreams, they can be attracted to serve their native land for overall development of the state as well as of nation, Sandhu added.