Chandigarh: The leaders of Punjab unit of the Aam Adami Party (AAP) here today tried to march and staged a dharna in front of Punjab chief minister Amarinder Singh’s official residence over corruption charges against him. 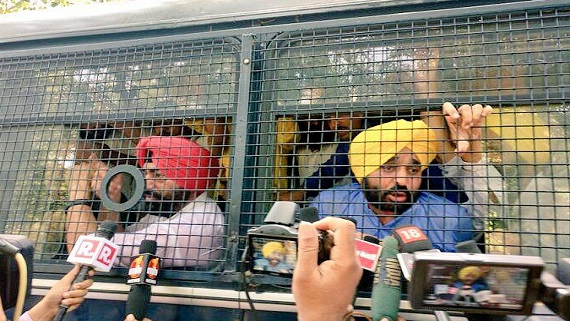 Dharna that was lead by chief of Punjab Aam Aadmi Party, Bhagwant Mann, the Leader of Opposition, Sukhpal Singh Khaira and the chief of Lok Insaaf Party, Simarjeet Singh Bains along with MLAs and leaders of Aam Aadmi Party were detained outside MLA hostel after they clashed with police while marching toward the official residence of Chief Minister.

The leaders were then whisked away in police buses to sector 17 police station. The leader of opposition, Sukhpal Singh Khaira while addressing a press conference at Chandigarh on August 30, had asked Capt. Amrinder Singh to either quit as Chief Minister or unilaterally hand over investigations and trials of both corruption cases of Amritsar and Ludhiana to the CBI for trial outside the state of Punjab. Neither the CM has resigned nor has handed over the investigation to CBI, so the MLAs and office bearers of AAP were forced to hold a ‘Dharna’ against Capt. Amarinder Singh.

Addressing the workers AAP chief Bhagwant Mann said that the unsanctified alliance between Capt. Amarinder Singh and Badals has now exposed as both are trying to save each other in corruption cases. He said that the leaders of both parties have acquired clean chits in different corruption cases form bogus inquiry commissions formed by their governments. He questioned if Bikram Majithia, Tota Singh, Adesh Partap Kairon etc were given clean chits then who looted the exchequer of state. 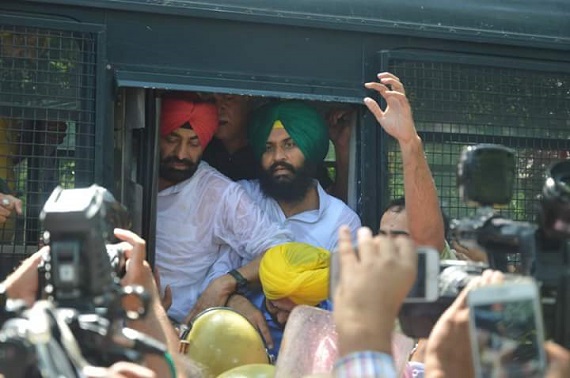 Opposition leaders being taken away by the Police.

Furthermore, Bhagwant Mann said that AAP will not let Congress to loot the state on terms of Badals. He said that the leaders and volunteers of AAP will continue to raise the voice of people inside and outside the Vidhan Sabha.

AAP president said that earlier Punjab government led by Parkash Singh Badal that got Capt. Amarinder Singh expelled as MLA on the basis of a Vidhan Sabha committee report, indicting him in the infamous Amritsar Trust scam and  same Badal filed the cancellation report on 4th October 2016, giving Capt. a clean chit. It shows that both parties have secret alliance to loot the state.

Moreover, the leader of opposition, Sukhpal Singh Khaira said that that there is no scope for a free and fair trial against Capt. Amarinder Singh in the infamous Amritsar Improvement trust scandal, after the court of Mohali rejected the manipulated vigilance bureau cancellation report on the 24th August.

The leader of opposition said that Capt. Amarinder Singh in his election manifesto had promised ‘Zero Tolerance’ against corruption in Punjab, but he is now not only shying away from taking action against his corrupt minister Rana Gurjeet for his involvement in the sand mining scam but instead shielding him.

He said that the belated and pre-meditated inquiry ordered by Capt. Amarinder Singh into the mining scam was a tailor made exercise, to absolve the accused Minister Rana Gurjeet Singh through the handpicked, controversial and bogus Justice Narang commission.

Capt. Amarinder Singh must either resign as CM or hand over inquiry of Ludhiana City Centre and Amritsar Improvement Trust case to CBI for a free and fair trial. He asked Capt. Amrinder to fulfill his promise of ‘Zero Tolerance’ against corruption by sacking Rana Gurjeet from cabinet, he adds.