Patiala/ Sangrur: Internal trouble of the Aam Aadmi Pary’s Punjab unit denies to die down. It has now landed in a fresh controversy with an audio clip allegedly of Sangrur MP Bhagwant Mann criticising the party leadership going viral.

The circulation of the audio clip on the social media has created ripples in the political circles in the wake of the fact that Bhagwant Mann, who is considered to be a confident of Arvind Kejriwal, is openly criticising the party leadership.

Bhawant Mann could be heard levelling accusations on certain party leaders, including HS Phoolka, Sucha Singh Chhotepur and Harinder Singh Khalsa, besides others. He has also expressed his “resentment” over the functioning of the party’s central leadership. 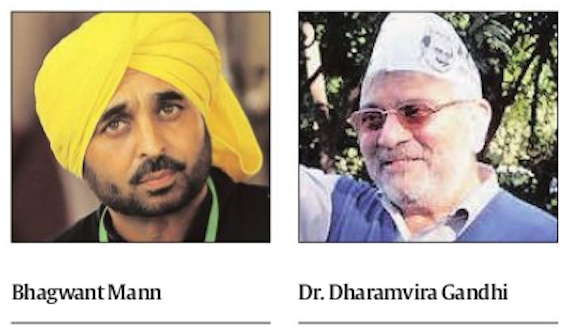 Whereas the audio clip’s leak has made headlines in almost all newspapers, the Punjab leadership of the Aam Aadmi Party has tried to underplay the issue.

There has been no confirmation or denial so far from Bhagwant Mann on the contents of this audio clip. Dr Gandhi, however, reportedly told an English newspaper that it was a personal conversation between him and Bhagwant Mann.

Suspended AAP leader and Patiala MP Dr. Dharamvira Gandhi said that he had not recorded the conversation but it appeared to have been done by some intelligence agencies who were “tapping conversations” between representatives of opposition parties.

As per a report by the Indian Express (IE), Bhagwant Mann’s spokesperson said that as Dr Gandhi had already told the media that there was nothing wrong in what Mann had said, they also wanted to stick to the same stand.

Sucha Singh Chhottepur reportedly said that he had not heard the clip but he did not want to say anything against anyone. He refused to reveal on whether he would complain to the party high command or not.