In a written release sent to the Sikh Siyasat News (SSN) the Shiromani Akali Dal (Badal) said that the charges levelled against Revenue minister Bikram Singh Majithia by the Aam Aadmi Party (AAP) was “proof” of the “complete bankruptcy of ideas” of the party which was now “working as a B team of the Congress” which had made the same allegations one and a half years back and miserably failed in proving any of them.

Addressing newsmen at Chandigarh yesterday, senior SAD (Badal) leaders and party spokesmen Maheshinder Singh Grewal and Dr Daljeet Cheema said the allegations levelled by AAP also proved that the “johnees” levelling them were outsiders who knew nothing about Punjab. “Every single allegation levelled by the AAP leaders today has already appeared in the media earlier and even heard by the court which has decided the same after listening to the merits and demerits of the case. Recycling the same allegations by taking them out of the dust bin and trying to defame the SAD speaks of the deceitful behaviour of AAP which is now trying to fool the people in the same manner as done by the Congress earlier’’ ,they said. 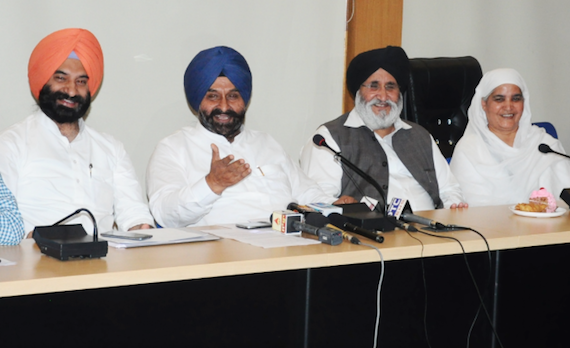 Giving an example of the web of lies and calumny being spread by AAP which had done the same earlier in Delhi, the SAD leaders said Mr Bikram Majithia had not travelled to Canada for the last eleven to twelve years. “The AAP leaders should tell the people the dates when Mr Majithia travelled abroad after the formation of the SAD-BJP government in 2007”, they added.

Mr Maheshinder Grewal said the truth was that todays press conference was held by Punjab AAP incharge Sanjay Singh to save him from criminal defamation proceedings launched against him by Mr Majithia which would result in him being put behind bars. He said if Sanjay Singh had so much faith in the documents in his possession he should have submitted them in court as evidence rather than applying for bail. “Instead of doing this Sanjay Singh acted as a coward and applied for bail even though he professed that he would rather go to jail than apply for bail”.

The leaders said Sanjay Singh was now following the same hit and run tactics of his leader Arvind Kejriwal who had emerged as the new master of deceitful politics. “Kejriwal announced to register a case against then Delhi chief minister Sheila Dixit if AAP came into power but now he has asking people to give him evidence to do the same. Similarly AAP claimed it would be a party with a difference and not follow a personality cult but the way Mr Arvind Kejriwal threw out even the founders of AAP from the party is best reflective of the new personality cult being followed by AAP.

Asserting that the Delhi leaders wanted to malign the SAD and the SAD-BJP government with the sole purpose to wrest power, Mr Grewal and Dr Cheema said the truth was that the entire allegations levelled by them against Mr Majithia were hearsay. They said despite this Mr Majithia had answered each and every allegation. “Now it is up to the courts to decide the case not two johnies from Delhi”, the leaders added.

The leaders also made it clear that all the allegations being levelled by AAP had started when the Union government was headed by the Congress. They said following this a number of central agencies had probed the allegations and found nothing incriminating against Mr Majithia. All the documents presented by them were already in court. ‘’AAP leaders of Delhi cannot take on the mantle of passing judgement on the same allegations only because it suits their cheap political interests”, the SAD leaders added.