California, USA (September 14, 2016): According to a written press release issued by the Sikhs For Justice (SFJ) the Aam Aadmi Party Punjab Convener Gurpreet Ghuggi faced protests and wrath of the SFJ activists for his statement allegedly comparing the Panj Pyaras with his party leaders from Delhi and Uttar Pradesh.

As per SFJ, [o]n September 14, “Sikh nationalists” rejected the lame apology by AAP Convener and confronted him while he was addressing a gathering in the city of Tracy, California.

“AAP Punjab convener Gurpreet Ghuggi while addressing a gathering in Amritsar on September 04 stated that “if first of the Panj Pyaras came from Lahore, the second one was from Utter Pradesh and Guru Gobind Singh did not question that why they came from outside Punjab. How can anyone question Kejriwal coming from Delhi and others from Uttar Pradesh”. Earlier Ghugi on a TV openly credited Punjab Police for paving the way for cultural programs by eliminating Sikh nationalists during the decade of 90s”, reads the statement by Sikhs For Justice (SFJ). 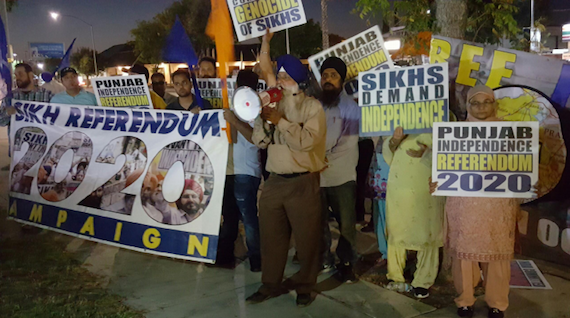 “AAP Convener Ghuggi was one of the prime members of the team constituted in 1990’s by then DGP KPS Gill to hold cultural programs in the villages of Punjab to divert the public attention from ongoing police abuses against Sikh nationalists”, stated attorney Gurpatwant Singh Pannun, legal advisor to SFJ.