Chandigarh: Aam Aadmi Party (AAP) is heading towards split in Punjab with Sukhpal Singh Khiara led faction gaining more support. The group got a shot in arm on Monday as Garhshankar MLA Jai Kishan Singh Rodi announced to support them.

Sukhpal Singh Khaira has maintained that the group is in talks with 4 more MLAs who might join their camp in coming days.

Meanwhile, the Central leadership of Aam Aadmi Party is trying to convince Sangrur MP Bhagwant Mann to resume active role in the state. 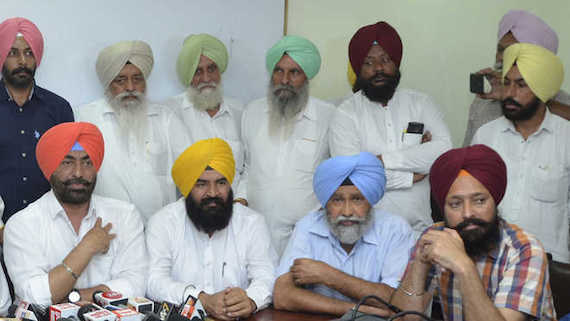 Addressing a press conference on Monday MLA Jai Kishan Singh Rodi, who had facilitated meeting between Khaira camp and party leadership in Delhi, said he had tried to end the impasse.

“I tried to resolve the differences between the local unit and central leadership, but there was no headway. We were not given a hearing in Delhi. The central leadership is prone to backbiting and our voice is not being heard. The mediators are to be blamed”, Times of India (ToI) quotes him.

He said he had got an assurance from Khaira and other MLAs that they would not join any other party. “We will continue to be in AAP. I also took feedback from volunteers and NRI supporters,” he reportedly added.

Despite sharp differences and deadlock between their group and the central leadership of AAP, Sukhpal Khaira and others said that they would not split the party.

“The dissident MLAs will not quit the party. I have got an assurance from Khaira and other MLAs that they would not join any other party. We will continue to be in AAP,” MLA Jai Kishan Singh Rodi reportedly said during press conference.

Also adding that they did not want to break the party, Kharar MLA Kanwar Sandhu said: “We are happy being in the party. Kejriwal and Manish Sisodia are our leaders. But we oppose their decisions.”

“Misinformation is being spread that I and other AAP legislators with me are trying to split the party’s Punjab unit…We are not trying to break the party. We are very much part of the party. Decisions regarding Punjab should be taken by Punjab leaders and not imposed by the AAP central leadership. We are only opposed to some wrong decisions, pertaining to Punjab, taken by the AAP central leaders,” The Poineer quote Sukhpal Singh Khaira.