The Aam Aadmi Party said that the RBI has discovered that food grains supposed to have been bought with bank funds have vanished from Food Corporation of India (FCI) godowns in Punjab. 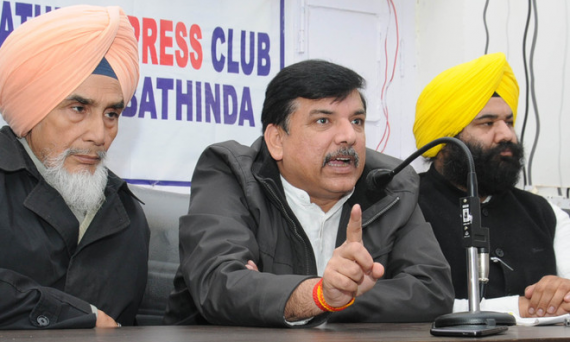 Sanjay Singh while referring to Economic Times report from Mumbai and Delhi, said the Parkash Singh Badal led SAD-BJP government in Punjab must come clean on how the food stocks were siphoned off.

Sanjay Singh said the SIT should also go into the role of the Badal government, BJP led centre government and the banks, who were all aware of the missing food stocks but made no effort to resolve the issue or rescue the situation.

“ Our biggest worry is that if the Badal government has failed to pay the loan to the banks how will it pay to the Punjab farmers for their wheat crop whose procurement has already begun in the state”, said Bhagwant Mann.

According to Bhagwant Mann the issue of the missing stocks is a matter of serious concern given that it has happened under the watch of a financially profligate Badal government.
“The Badal government has been unable to pay the salaries of its employees and has been auctioning off government properties to raise money”, said Mann.

Chander Suta Dogra said the state government should also clarify how it will pay farmers in the ongoing procurement season when fresh food credit by banks is in jeopardy owing to the inability of Badal government to clear the loans for previous years due to deficient stocks.

Dogra said this is monumental example of misgovernance by the Badal government which is playing with the lives of lakhs of poor farmers whose only source of livelihood is money earned from procured wheat and rice.

“The complete disregard of farmer’s interest by the Badal government can also be seen in its refusal to allow Punjab farmers to sell their produce on the national Agriculture digital market. At a time when the state’s farmers are committing suicide due to dwindling returns, the action of the Punjab government to deny them access to better markets across the country is ‘anti farmer”, said Dogra.